RISING OF THE MOON, THE

“It’s well-produced and well-acted, but never moving and a wee bit too stagy.“

A trio of classic Irish short stories set in the early 1900s about the Irish living under British rule. Irish-American filmmaker John Ford (“The Searchers”/”The Horse Soldiers”/”Mister Roberts”) traveled to Ireland to direct the performers of Dublin’s renowned Abbey Players.It’s well-produced and well-acted, but never moving and a wee bit too stagy. Tyrone Power introduces each story.Frank S. Nugent is the screenwriter.

The first story is a droll morality play entitled “The Majesty of the Law” and is authored by Frank O’Connor. It has inspector Michael Dillon (Cyril Cusack) leave the police barracks of Ballinalough and walk along the country path to get to the ancestral estate of Dan O’Flaherty (Noel Purcell). After a friendly chat and indulging in some poteen in the cottage, Dan learns about the fine for smacking a neighbor who insulted his reputation. Two busybody neighbors offer to pay the fine. But Dan refuses their offer because of his principals. When ready to report to jail, Phelim O’Feeney, the family enemy who made the charges, offers to pay the fine. Again Dan refuses, as the traditionalist’s pride to uphold the O’Flaherty name outweighs all other considerations.

The second story is a comedy entitled “A Minute’s Wait” and is authored by Martin J. McHugh. At the Dunfaill railway station, the Ballyscran and Dunfaill train pulls in and the porter Paddy Morrisey (Jimmy O’Dea) shouts out there will be “one minute’s wait only” before departure. Most of the passengers go to the station bar. On the platform, Mrs. Falsey (May Craig), traveling with her niece, Mary Ann McMahon (Maureen Connel), encounters farmer Barney Domigan (Harold Goldblatt) and his son Christy (Godfrey Quigley). Learning his son is about to get hitched in an arranged marriage, that comes with a three-hundred-pound dowry, Mrs. Falsely despite Barney’s insistence on the marriage, during the many short breaks cunningly talks the farmer into having his son marry her niece. The running gag is that there are a number of other “one minute delays, that include waiting for a goat to board, a box of lobsters delivered for the bishop’s celebration and the train waits for the victorious local hurling team. All the while in the first-class compartment, Col. and Mrs. Charles Frobishire (Michael Trubshawe & Anita Sharp), a stuffy British couple, are the only passengers who stay in their compartment, but when the train departs they are somehow the only ones left at the station.

The third story is a political drama entitled “1921”and is authored by Lady Gregory. It’s set in Galway, in 1921, during the “Troubles” of the “Black and Tan War.” Political prisoner Sean Curran (Donald Donnelly) awaits his execution, while sympathizers gather outside the jail in support. Two nuns, one of whom claims to be Sean’s sister, ask a sympathetic warder (Joseph O’Dea) for a last minute visit with the condemned man. When the sisters leave Sgt. Michael O’Hara (Dennis O’Dea) helps the bogus nuns into a cab and notices that one wears high heels, but ignores it. Later when the major and his soldiers come to take Sean to the gallows, they find only Peggy O’Donnell, an actress from Brooklyn, in his cell. Sean that evening disguises himself as a balladeer and gets recognized in the street by the sergeant’s wife (Eileen Crowe), who only that morning called the freedom fighter “the greatest man in Ireland today.” But now wifey hungers for the five-hundred-pound reward for Sean’s capture and thinks of turning him in. Sean then sings the revolutionary song “The Rising of the Moon,” which O’Hara and his wife recall as the song that they used to sing during their courting days. With that burst of nostalgia, they let Sean escape. 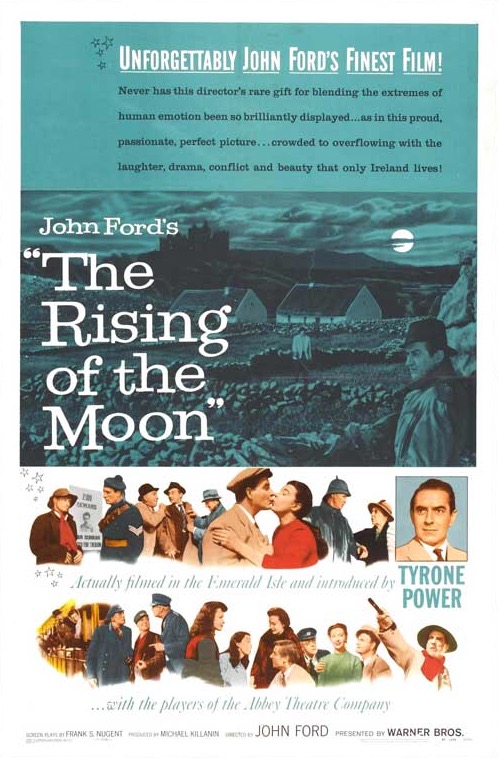 LEGEND OF TOM DOOLEY, THE