Barbet Schroeder (“More”/”Maitresse”/”Barfly“) directs this gripping drama about the sensationalized case of the aristocratic, born in Copenhagen,Austrian-American emigre from England, the Newport millionaire society figure Claus von Bulow (Jeremy Irons), who was convicted in 1982 of attempted murder by causing his even wealthier American wife, Sunny (Glenn Close), to be left brain dead in an irreversible coma because he allegedly injected her with insulin and was sentenced to thirty years. The pompous and unsympathetic Claus, disliked by the public who never disputed his guilt, is out on bail of a million dollars put up by Claus’ former employer the billionaire J. Paul Getty and hires the Harvard law professor, Alan Dershowitz (Ron Silver), as he appeals the conviction. Through the efforts of Dershowitz and his hard-working student team, they are able to reverse Claus’ fortune in a Rhode Island appeals court as he’s acquitted because of lack of proof.

It’s based on the liberal Jewish attorney Alan Dershowitz’s nonfiction book, and the literate screenplay by Nicholas Kazan leaves it ambiguous, not resolving on moral terms if Claus was innocent or guilty. The drama works best if viewed as a black comedy.

The disembodied voice of Sunny acts as narrator, and through multiple flashbacks what might have happened during the diabetic Sunny’s two seperate comas is reviewed. It gives us things to ponder, such as how effectively does the legal system work and the wide gulfs between the wealthy and academic classes. Schroeder has a field day in mocking the rich with ongoing satire on their hedonism, superficiality, crass mansion lifestyle and dullness, as he unfavorably compares Claus and his useless society companions with the idealistic passionate Dershowitz working-class crowd.

Terrific spirited performances by Irons and Silver, polar opposites, gives the film a look of class. Though the film leaves out too much for it to be viewed as anything more than entertainment. 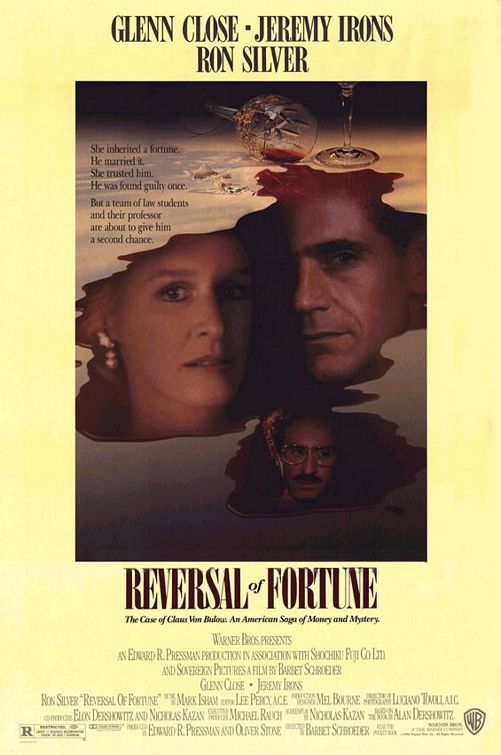