A classic Western epic filmed in B & W that is noted as the first western directed by Howard Hawks. It was also Montgomery Clift’s first movie role, though the film he made afterwards, “The Searchers,” premiered first because of the long production schedule of Red River.

In 1851 Thomas Dunson (Wayne) and his companion Groot Nadine (Brennan) left St. Louis by wagon train to go to California. But Dunson left the wagon train and the girl he loved, Fen, to settle the land in Texas by the Red River. He promised to bring Fen back when he got the ranch settled. But Indians attacked the wagon train and killed everyone but young Matt Garth. Dunson builds up this empty land with his one bull and the one cow Matt had, as he also kills all who try to take the land away from him.

The plot line involves Dunson 14 years later becoming a Texas cattle baron with the biggest spread in Texas, but who is broke and becomes obsessed with taking over nine thousand head of cattle on a three month drive to Missouri. This cattle drive is the first forged down the Chisholm Trail. His adopted son Matt (Clift) and Groot, as the drive cook, come along. The other noteworthy cowboys on the drive are Cherry Valance (Ireland), a gunslinger who might be as fast a draw as Dunson and Matt. The reliable Buster (Beery), who becomes second in command. DanLatimer (Carey Jr.), who is happy that he will be getting a $100 for being on the drive and will then buy a ranch for his family.

The drive takes place in 1865, after the Civil War, as the famous scene is where John Wayne tells Montgomery Clift: “Take ’em to Missouri, Matt!” And then there are the cries of “Hee-yaw!” and waves of cowboy hats in the air from all those involved in this difficult drive that no one made before. It’s all a lot of fun and requires some acting from Wayne, who plays a role as both a hero and a villain. The cowboy hero Wayne from the John Ford films becomes a tortured and bitter man during the cattle drive.

The cowboys experience on the trail a stampede, starvation, and Dunson exerting cruel punishment on those who desert. Dunson goes without sleep to watch for deserters and starts acting like a madman. Finally Matt has enough of Dunson’s stubbornness and wrong decisions and stops him from hanging a pair of deserters. He leaves Dunson behind as he takes the men and the cattle on a short-cut to Abilene where the railroad tracks are. Dunson swears to kill him when he catches up with him again, and gathers up men in pursuit.

On the way to Abilene, Matt and his men rescue from an Indian attack a wagon train heading to Las Vegas. During the attack Tess Millay (Joanne Dru) has a running conversation with Matt, which seemed absurd. During the night they fall in love and Matt gives her a silver bracelet which Dunson gave to Fen before leaving her. It was his mother’s bracelet and it was on the wrist of an Indian he kills after the wagon attack in 1851. When Dunson catches up with Tess the two jaw about Matt, and Dunson says he’ll still kill him in Abilene. It comes down to Wayne’s way of settling things with a gun or Clift’s more civilized way of talking things out, until forced to act. The film took the same theme as “Mutiny on the Bounty.”

The conclusion seems to be a forced happy ending after all the build-up to the confrontation. But that’s foiled by Tess, who gives them a tongue-lashing about how they love each other. The conflict was a play on the Greek Oedipal myth.

It is interesting to note that the cattle buyer in Abilene was Harry Carey Sr, once a star in silent westerns but now playing character parts. He appeared together for the only time with his son Harry Carey Jr., and died shortly after filming.

It was beautifully shot by Russell Harlan, and the ensemble cast of Ford and Hawks’ regulars did a stellar job. Wayne and Clift were superb, and the film had a nice sense of dark comedy. It’s the best western of the 1940s. 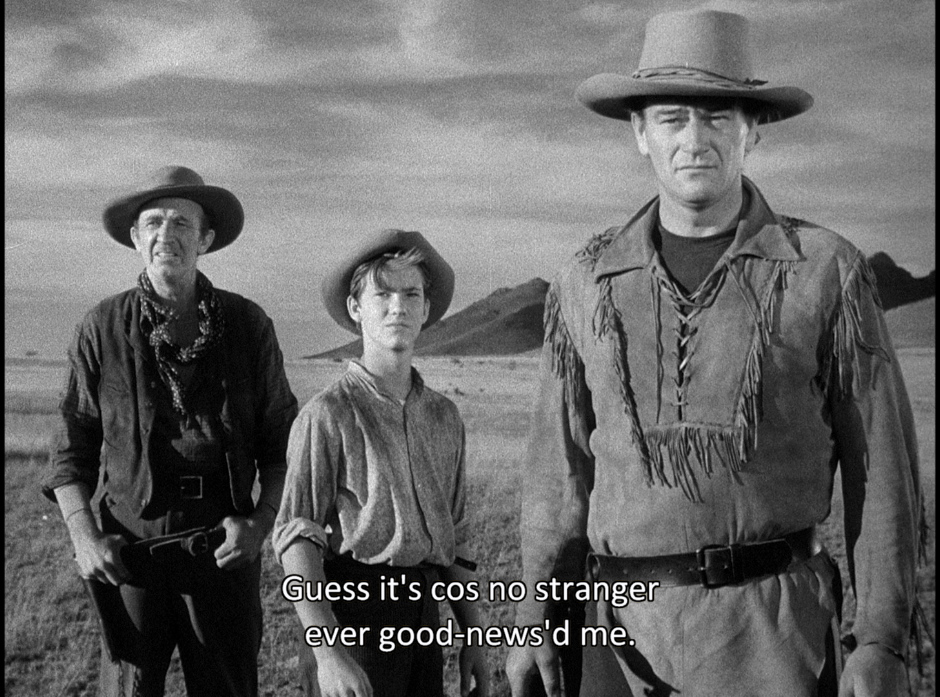