RECORD OF A TENEMENT GENTLEMAN, THE (Nagaya shinshiroku)

“A simple warmhearted comedy tale about the human condition.”

Yasujiro Ozu’s (“Equinox Flower”/”Late Spring”) first film about postwar Japan is a simple warmhearted comedy tale about the human condition and the resiliency of the Japanese after their defeat. Ozu cowrites it with his longtime collaborator Tadao Ikeda. It’s told in the director’s usual formal style and shot primarily inside the studio, and though bordering on mawkishness never goes there because of the skill of the master director making the plot line not as important as developing the richness buried inside his characters. The subjects are members of the middle-class living in a downtown tenement and struggling to get by the hard economic times by being active in the black market. A pudgy, shy little boy who is lost by the Kudan train station of Tokyo named Kohei (Hohi Aoki) is brought back to the tenement by a well-intentioned fortune teller (formerly an amusement show story-singer) named Tashiro (Chishu Ryu), who won’t keep him because he says he hates kids; but he feels sorry for the kid and brings him to a sour middle-aged war widow named Tané (Chouko Iida). She reluctantly agrees to keep him overnight and the next day all the neighbors draw straws to see who gets stuck with the kid. Tané draws the short straw. When it’s discovered his mother is dead and his father lives in the suburbs outside of Tokyo called Chigasaki, Tané brings him by train there but the neighbors say they just moved in and all they know is that the kid’s father is an itinerant carpenter and went to Tokyo to look for work. Since Tané finds him a bother she tries to lose him by the beach, but the kid tags along. When the kid wets his bed, she bawls him out and when he does it again fearing another scolding he runs away. While he’s gone for a day, Tané realizes she misses him more than she has let on and sends Tashiro out to find him. Tashiro again finds him in Kudan, and returns the kid to the grateful woman after making her promise to stop nagging him. At the end of one week the father (Eitarô Ozawa) suddenly shows up to claim the kid and say he wasn’t abandoned but they got separated. The wise Tashiro tells the widow there are many other war orphans living in the streets of Tokyo with no one to care for them and tells her to see for herself by going to Ueno Park and standing by the bronze statue of Takamori Saigo (legendary 19th-century patriot).

It’s a relatively optimistic film that suggests even though the country has suffered greatly (everyone in the film has suffered a loss due to the war) there’s hope in weathering these bad times if the people can pull together and stop being so selfish. The generosity of the poor people is very moving and is played out in a sincere and irresistible comical way. The highlight of the film was Ryu singing a traditional love folksong in full at the urging of his tenement neighbors at their regular meeting, which was a potent reminder of the great culture that was not taken away by the war. 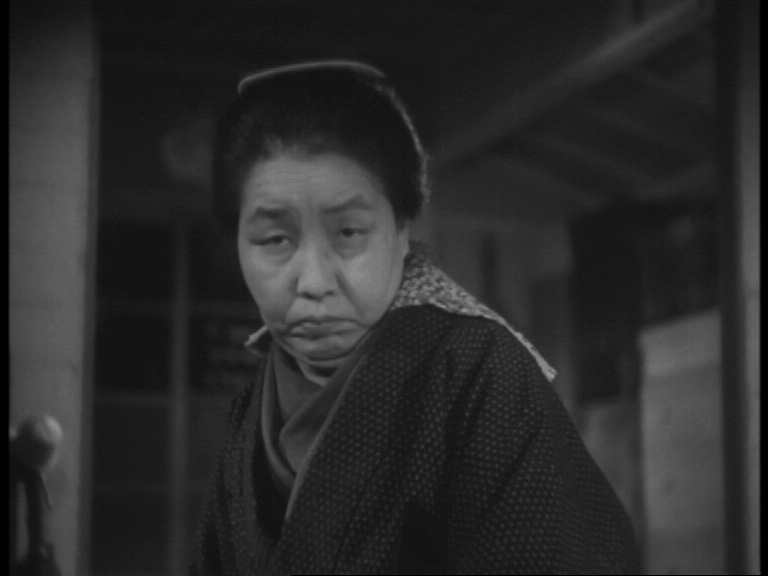