A very funny spoof about a colorful couple who must have a child and will try to get one by any means possible. The Coen brothers know how to push the right comedy buttons as they stereotype a lowclass couple and move them over the trailer park edge.

H.I. (Cage) is an habitual, incompetent criminal, specializing in convenience store robberies, where he gets caught but receives light sentences because his gun is never loaded. Ed (Holly) is the prison officer who takes his picture every time he enters the prison, and after his third stay she decides to accept his proposal and marry him.

Distraught when she is told by her doctor that she is barren and can never have children, Ed is even further upset that she can’t adopt because of her husband’s prison record.

H.I., since his release, has gone straight working at an industrial job and living in a trailer on the outskirts of Tempe, Arizona, as the Coen brothers raise the question of how long this habitual criminal can go on being a normal family man before he reverts to his old habits.

With news of quints born to a wealthy owner of the largest chain of unpainted furniture stores in Arizona, Nathan Arizona Sr. (Trey), the couple reasons that it is unfair that some have so much while others have so little. So to balance things out they kidnap one of the quints, the photogenic Nathan Arizona Jr. (Kuhn), and bring him home.

Armed with Dr. Spock’s book on how to raise the child, they are the very picture of doting parents. But their bliss is short-lived, as two of H.I.’s prison mates escape and come knocking on his door at 2 a.m.. Gale (Goodman) and Evelle (Forsythe) want to stay, but Ed insists they are a bad influence on H.I. and must leave as soon as possible.

H.I. is then visited by a so-called normal family his foreman friend, Glen (McMurray), and his fast-talking wife Dot (McDormand), who have a household filled with adopted children. They unleash their herd of uncontrollable adopted children onto the McDonnough house, which turns out to be a riotous slapstick comedy scene. Coen ridicules these families for wanting children, thinking of the children in terms of being ideal and are not aware that they are real people.

H.I. goes berserk at Glen’s suggestion that they do a wife swapping thing and then punches his dim boss in the nose, which gets him fired. When Glen figures out who the baby is that H.I. has, he tells him that he won’t turn him over to the police and collect the reward; but, only because his wife wants to adopt the baby.

H.I. is filled with dreams of what should be right and wrong in life. He also has fatalistic nightmares. One of his nightmares materializes in the person of a heavily armed biker from hell, Leonard Smalls (Cobb). He is a man-tracker who wants more than the $25,000 reward Nathan Arizona offered to get his baby back as he fails to make a deal with the magnate, but not before threateningly telling him that he will get the baby from the kidnappers and raise the price of the ransom.

There is a flat scene where the fugitives who have stolen the baby from Glen are robbing a bank but do not know what to do with baby Nathan, as they take him into the bank while the robbery is in progress. Here, the comedy was predictable.

The Coen brothers know how to make a quirky film and they know how to write side-splitting dialogue. And if you are looking for something heavier, like a lesson to be gotten from all this or a searing comment on society, maybe you could even find that here, also. Though sometimes the comic situations and the way all the characters talk funny seems forced, it still recovers from these lapses and bounces back with a “Keystone Cop” comedy situation. There are ferocious dogs chasing the hero, improbable victories for our improbable hero, and there are store clerks who can be vengeful to him. If absurd comedy makes you do cartwheels, then this film should take you for a spin. 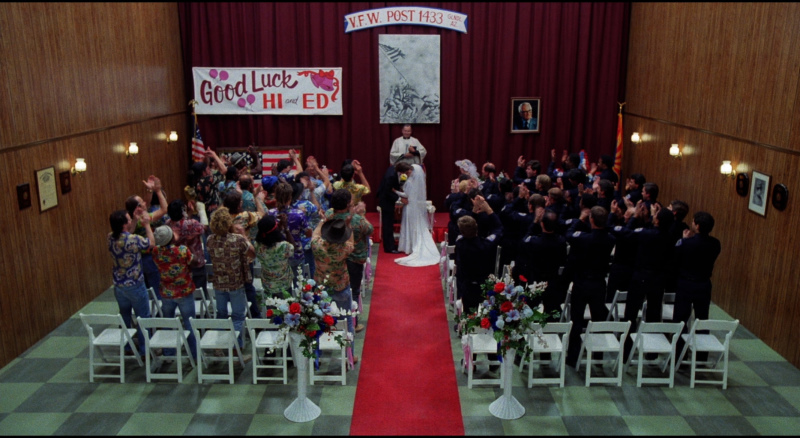