“A low-key bleak movie, that desperately wants to tells us of the unhappiness in Europe and the rise of nationalism.”

Cristian Mungiu (“Graduation”/”Beyond The Hills”) is the top filmmaker of the Romanian New Wave. His R.M.N. title stands for the local acronym for an MRI, as one of the film characters receives a brain scan and finds he has an inoperable tumor. This translates to a brain scan for a nation troubled over conflicts of the racial, social, political, national, ecological and emotional kind, which also may be inoperable.

It’s a grim psychodrama of central European xenophobia, as it tells bout a multi-ethnic border community in Transylvania (made up of Romanians, Hungarians and Germans) who have been there for thirty years living in relative harmony). But they act hostile to a group of newly arrived dark skinned Sri Lankan immigrants.

As the story goes, Matthias (Marin Grigore) was forced to abandon his job in a German slaughterhouse after assaulting the foreman who had called him a “lazy gipsy”. He returns to his Transylvania hometown unemployed. His wife Ana (Macrina Bârlădeanu) is not happy with him because he starts having an affair with the Hungarian Csilla (Judith State), a fine woman who plays the cello and manages a modern hi-tech bakery with the help of EU grants.

Her bakery has hired the Sri Lankans because of need, as the locals, even if looked down upon on foreign soil, would rather work in Germany for the higher wages than take these menial jobs.

Trouble brews when Matthias’s sick father (Andrei Finti) has an MRI scan (in Romanian a “rezonanță magnetică nucleară”, or RMN). And Matthias’s tender 8-year-old son Rudi (Mark Blenyesi) has become afraid to speak or be alone after seeing something awful in the woods that has frightened him. We don’t know what it is as it happens off-screen, but Matthias now walks around with his rifle.

At a “town hall meeting” everyone’s racist paranoia is aired out, and it’s filmed in one, continuous, uninterrupted 17-minute static shot.

RMN is a low-key bleak movie, that desperately wants to tells us of the unhappiness in Europe and the rise of nationalism (much like the rise of Nazism in Germany in the 1930s) that we might not be aware of. However, R.M.N. gets bewildering in its finale, as it unloads on us dreamlike visions (seemingly of hope) and leaves us with a riddle to ponder: that we should look out for bears.

There seems to be no easy answers for the problems uncovered, and we are warned to keep an eye out on the rise of right-wing nationalism.

It screened at Cannes. 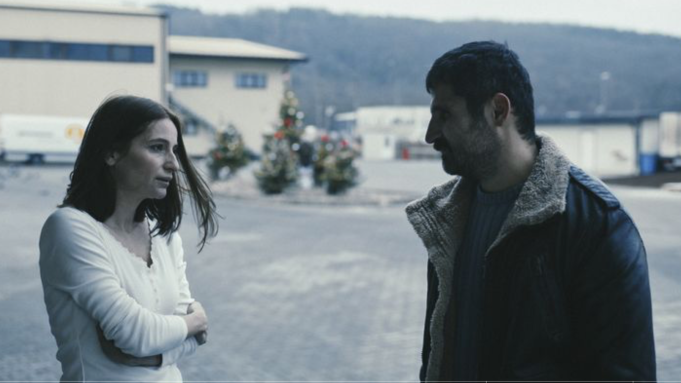