“Only stands as an incomplete work that represents what might have been great if so much of it wasn’t missing.”

The Austrian-born in 1885 and American emigrant (sometime between 1906 and 1909) writer-director Erich von Stroheim (“Greed”/”The Merry Widow”/”The Wedding March”), the secretly Jewish (tried to hide that his father was a Jewish hat manufacturer) bad boy filmmaker was fired before he could complete Queen Kelly and not even the restored version in 1985 got all of the film, though it’s the most complete version available. It’s just plain remarkable that it turns out so riveting in parts despite its obvious flaws, but it only stands as an incomplete work that represents what might have been great if so much of it wasn’t missing. Even before this pic von Stroheim had infuriated his studio bosses with his expensive artistic demands, inability to get a film in on time and on budget, and unchaste behavior, so much so that no studio wanted to take a chance on hiring the so-called wunderkind. But silent screen great Gloria Swanson respected his genius and financed the film with her own money and mostly her lover Joseph P. Kennedy’s (JFK’s dad) money. During the shoot Swanson and von Stroheim never got along. The last straw was when von Stroheim had an actor, Tully Marshall, drool tobacco juice over her hand, and she got Kennedy to stop financing the film that was more than half-finished, with $600,000 spent so far, and fire the director. Swanson salvaged the filmed footage by having it re-cut. The bastardized released version was never approved of by the fired director. It was shown in 1932 in Europe, but the legendary film was never shown in America until 1985. Von Stroheim never directed another film, though he did act in both American and European films from then on and became recognized as one of cinema’s truly tragic figures. For Billy Wilder’s 1950 Sunset Boulevard, Swanson and von Stroheim mended fences and agreed to work together as actors. In a classic scene, Swanson with great joy on her face watches Queen Kelly.

In Kronberg, capital of Ruritania, the mad Queen Regina V (Seena Owen) prepares to marry her cousin, Prince Wolfram (Walter Byron). During exercises with his army squadron, the prince spots in a Catholic orphanage Irish orphan beauty Patricia Kelly (Gloria Swanson) and becomes so obsessed with her that he wants her any way he can get her. Which leads the prince to set fire to the convent and kidnap her to his chateau.

There are at least two different versions on how it ends. In Stroheim’s version, the one I am reviewing, Kelly attempts suicide but it fails and she returns to the convent. A telegram arrives requesting her presence from her brothel owner guardian aunt (Sylvia Ashton) in German East Africa. Once there the aunt forces Patricia to marry brothel manager Jan Vooyheid (Tully Marshall), a tobacco-juiced stained alcoholic and cripple. Soon after the wedding, the aunt dies and Patricia refuses to have anything to do with hubby. In fact, she becomes the new madam and the customer’s call her Queen Kelly because of her regal bearing. In the unfinished scenario, shown in photographs, Wolfram gets released from prison and when he learns through the convent the whereabouts of Kelly, he is granted a transfer by the army to Africa and meets Kelly just as her hubby is killed in a bar fight. Wolfram learns his would-be bride, the queen, has been assassinated and he takes his place as king and marries Patricia, who becomes Queen Kelly.

In the hack re-cut version 70 minute version shown in Europe, a furious Queen Regina chases Patricia from the chateau with a lash and Kelly to avoid her advances throws herself in the river and drowns. It ends when the prince commits suicide by her coffin. 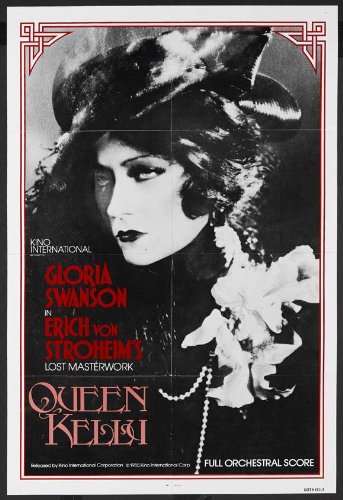