“This is one of the few Garbo performances that hasn’t dated badly.”

This queenly biopic is historical balderdash, but it’s a grand star vehicle for the legendary Greta Garbo. It’s made in the Hollywood tradition (and MGM style of being lavishly produced), that has a restless and troubled Garbo prancing around in drag as the 17th-century Swedish Queen Christina during the Thirty Years’ War looking and acting every bit as royalty. Rouben Mamoulian’s (“Love Me Tonight”/”Blood and Sand”/”Silk Stockings”) lively direction, sweeping camera movements and artistic eye for detail overcomes the sometimes stilted filming and keeps the period piece and costume drama lifted above its literate but uneven script by H.M. Harwood, Salka Viertel and S.N. Behrman. Garbo even gets away with saying such trite as “Snow is like a wild sea. One can go and get lost in it…”.

The crux of this tale is about the Protestant queen of Sweden pressured into a politically correct marriage with her military hero cousin Prince Charles to give Sweden a heir to the throne, but she falls in love with the handsome Catholic emissary from Spain, Don Antonio de la Prada (John Gilbert). This reunites the two legends from the silents. Gilbert, who was criticized for not being able to make the leap into talkies, replaced Laurence Olivier after a dismal rehearsal with Garbo where she didn’t connect with the Englishman and insisted above the studio objections that Gilbert was her man. In the end, the Queen must choose between loyalty to her people or following her own heart. This is one of the few Garbo performances that hasn’t dated badly. It has some controversy attached to it, because it has Queen Christina in drag for a good part of the film and gives her characterization hints of a bisexual twist (in actuality Christina was bisexual, converted to Catholicism, refused to marry and abdicated her throne).

When Sweden’s King Gustavus Adolphus dies in battle in 1632, after fourteen years of the Thirty Years’ War, the six-year-old Christina, raised as a boy by her father, is crowned ruler. She’s advised by Chancellor Oxenstierna (Lewis Stone) that Sweden will fight until it wins the war. The grown-up Christina, who digs wearing men’s clothing, confers with her council about the still-raging deadly war and decides that for the good of the country a peace treaty must be negotiated. The peace brings prosperity to Sweden and the people clamor for her to marry. Chancellor Oxenstierna urges that her best bet in doing her duty is marrying the much older popular war hero Prince Palatine Charles Gustavus. Instead the bookish and beloved by her subjects queen has an affair with Count Magnus (Ian Keith), her clever, manipulative and ambitious treasury secretary. The Queen soon tires of the unlovable Magnus and goes off horseback riding with her loyal valet Aage (C. Aubrey Smith). In the remote forest, while dressed in drag, she bumps into a a coach filled with Spaniards that’s stuck in the snow. One of the passengers is the diplomatic envoy of the Spanish king, Don Antonio de la Prada, who thinks she’s a male servant. Later he seeks shelter in the same inn she is staying at and he apologizes profusely for mistaking Christina for a servant instead of as a well-heeled gentleman. Since all the rooms are taken, Christina volunteers to let him share her room. Her true identity becomes known when she removes her jacket. Though still unaware that she’s a queen, the couple become passionate lovers for the next few days and vow lasting devotion to each other. When Antonio again encounters Christina in Stockholm, he’s shocked to discover she’s the Queen. He then proposes to her. Magnus when he gets wind of her love for Antonio, demonizes him to the Swedish public. At last, bowing to the pressures that she marry, the Queen makes her decision in front of the court, and it ends with her memorable long closeup shot as she looks mysteriously off into space and the viewer is encouraged to try and ascertain what she’s thinking.

The film though acclaimed by critics did poorly at the box office, especially outside of big cities, and was the beginning of Garbo’s downfall as the money making iconic queen for MGM. 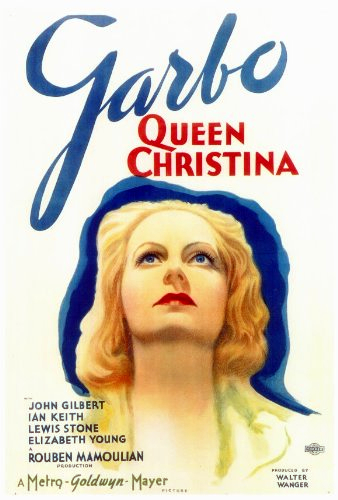