“The only thing carried over from Behan’s play is the bleakness.”

It’s based on the Irish playwright Brendan Behan’s breakthrough 1954 play, that was largely based on his own prison experiences resulting from his activities with the IRA. The legendary bigger than life Behan is celebrated for both his drinking and writing; the always witty writer once said of himself that he’s “a drinker with a writing problem.” The Quare Fellow is adapted by Jacqueline Sundstrom and German-born B-film American director Arthur Dreifuss (“The Last Blitzkrieg”/”Juke Box Rhythm”/”Riot on Sunset Strip”).

The title is Irish slang for a man who is condemned. It screams out as a protest against capital punishment, but is a severely watered-down version of the play that makes the argument seem facile. The play focused on two condemned men on death row humorously conversing and offering splendid gallows humor. Dreifuss changed the focus by having the death row inmate unseen–the same idea used by the play, so as to have the inmate without an identity as an ‘everyman.’ But during the entire story we never hear from the inmate and instead focus completely on the new prison guard in the Dublin prison, Thomas Crimmin (Patrick McGoohan), who arrives as a gung-ho believer in capital punishment and by the end is converted to be against the death penalty as he befriends the inmate’s comely wife Kathleen (Sylvia Syms) and develops a crush on her (which seems to be the deepest reason he changes his mind, other than he’s too nice a guy to be a warder and just doesn’t fit into such a hardened workplace setting). Aside from the superb performance by McGoohan (appearing at the time on the television series Danger Man) and from the all-Irish cast, the only thing carried over from Behan’s play is the bleakness.

Crimmin is a strapping lad from the west country, in the sticks, who gets assigned to the veteran kind-hearted screw Regan (Walter Macken)–someone at odds with the authorities, who respect how he performs his duties but don’t care for his bleeding heart liberal views. Their duty is to supervise two condemned inmates scheduled to die soon, but one gets a reprieve from the minister. Upon arrival at his first assignment as warder, Crimmin enthusiastically tells the sly prison Governor (Philip O’Flynn) that his duty is to uphold the rules and regulations above all else and that he believes wholeheartedly in the system. At the boarding house, where he’s a lodger, Crimmin meets the quare fellow’s wife Kathleen and starts singing a different tune about the death penalty; and, in the last hour even tries to help her get a reprieve from the minister.

The thin storyline hinges on finding out if the hangman will execute his duties or will the inmate get lucky and get a reprieve. It turns a powerful play into a slender tale about the misery of prison life and its prison politics, a subject fit for a B-film. The argument over capital punishment never materializes except that the filmmaker loads the deck with contrived scenes showing that anyone with a conscience would be against killing a person, and therefore the viewer is supposed to automatically believe that even a murderer who received a fair trial and is evidently guilty should not be executed. It doesn’t succeed because the storyline was too weak to carry off this message with much conviction for the undecided, as it lacks a needed dramatic arc and ends up singing only to the choir. 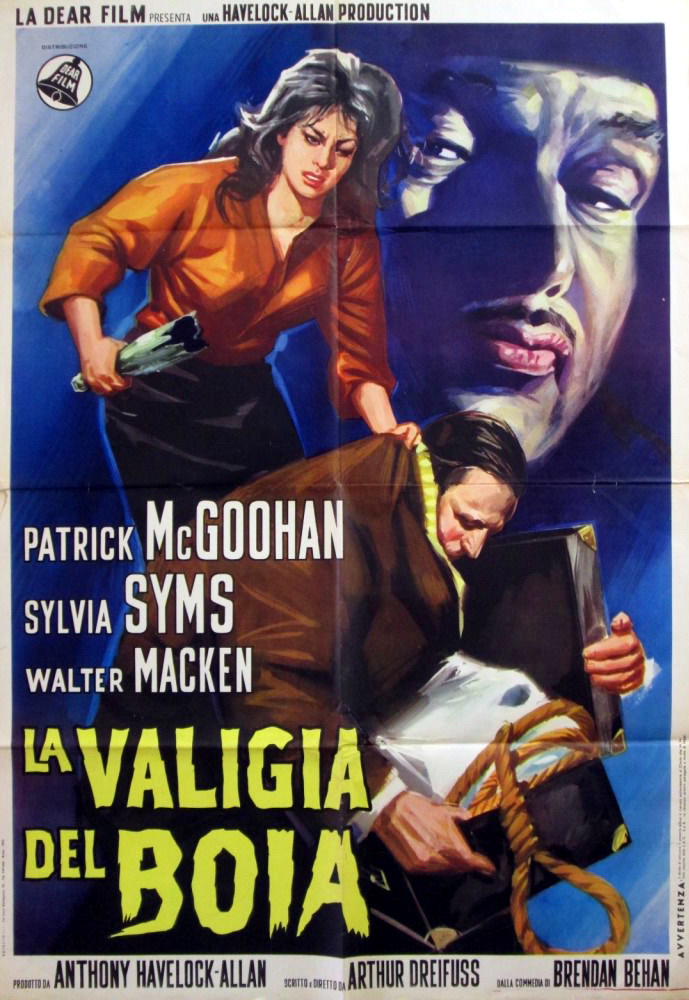