“The best thing about this cheesy rip-off mockumentary-styled horror pic is that I didn’t catch its virus or vomit after following its shaky developments.“

The best thing about this cheesy rip-off mockumentary-styled horror pic is that I didn’t catch its virus or vomit after following its shaky developments. This unimaginative film is lamely acted by its largely unknown cast. It’s a low-budget zombie flick that’s based on the 2007 Spanish film [Rec] by filmmakers Jaume Balaguero, Luiso A. Berdejo and Paco Plaza, which appears to do the same things that George A. Romero’s Diary of the Dead (2007) does but with less oomph. Director John Erick Dowdle (“The Poughkeepsie Tapes”/”Full Moon Rising”/”The Dry Spell”) cowrites the English version remake with his brother Drew and he makes it with a shaky camera. The by now old hat gimmick is that there’s video tape for the viewer to see the tragedy as it was going down, which makes it appear like a Blair-Witch-style film only with zombies.

Angela Vidal (Jennifer Carpenter) is an ambitious rookie TV reporter on the local program called “Night Shift” and is assigned with her cameraman Scott (Steve Harris) to cover a Los Angeles fire-fighting team (Jay Hernandez & Johnathon Shaech) handle the night shift. The TV people tag along to a downtown apartment building, with police already at the scene, to witness the rescue of a mentally disturbed shrieking elderly woman trapped inside. Scott’s camera is constantly running and captures the gruesome details as things go weird. When trying to escape from the building, the TV and fire-fighter teams find themselves trapped in the sealed off building the CDC (Centers for Disease Control) quarantined because of a mysterious infection that is spreading–which turns the infected into flesh-eating zombies.

It’s getting tiresome seeing the same device used so many times for gory horror pics not worth a wooden nickel, as its banal familiarity breeds contempt while its jittery camera can actually make you sick. 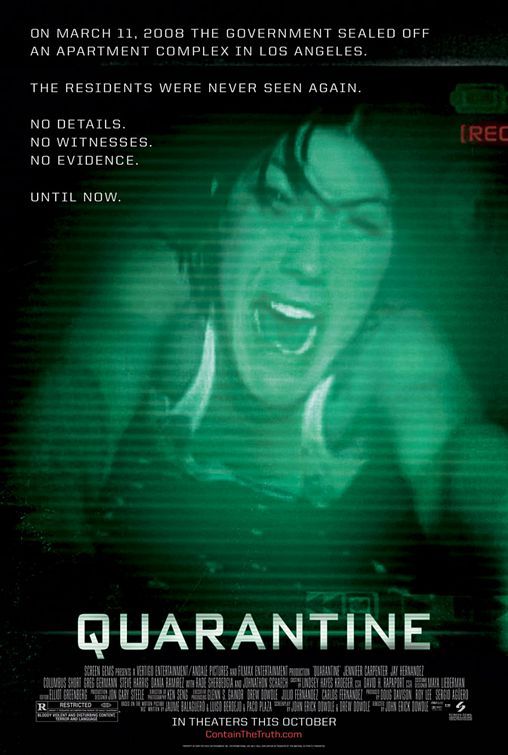