“It cries out to not only be heard but be seen for what it wishes to convey about the act of creativity.”

Peter Greenaway (“Drowning by Numbers”/”The Draughtsman’s Contract”/”The Cook, the Thief, His Wife and Her Lover”) faithfully follows the Bard’s “The Tempest,” that is in words only; he takes off on his fanciful own when it comes to the visuals and all the gimmicky technical filmmaking accomplishments (HD television and computer imagery). Outstanding cinematographer Sacha Vierny bombards us with a relentless barrage of dazzling visuals, which seems to be quite an accomplishment since the entire picture was shot in only some eight weeks in an Amsterdam studio. Michael Nyman, whose musical score was used, added greatly to the affecting and hypnotic nature of the film.

John Gielgud is Prospero, the duke who is exiled to a Mediterranean island with his young daughter, Miranda (Isabelle Pasco), and twenty-four Shakespeare books the filmmaker richly imagines into his own motifs (such as the book of motion, water, and cosmology). It’s a nervy work of great ambition, that is so splashy it nearly drowns out the Bard’s text yet the film itself never sinks. What makes it seem odd and fascinating, is that it has Prospero speak all the lines for the other characters until the last act. Though it’s a treat to have the eighty-seven year-old Gielgud mop up the screen with his madcap performance, there might be something like too much of a good thing overwhelming this free-wheeling production that makes it hard to follow without hitting the pause button every once and a while to regroup (this is one film I would recommend seeing on home video rather than the theater). There’s an arrogance and pretense underlying its visualizations, spun around a meditative framework of a highly literate nature and an easygoing eroticism (lots of naked bods and penis and titty shots), that rattles the bones of the artistic process. It seems at once questionable and beyond question in its achievement, and it cries out to not only be heard but be seen for what it wishes to convey about the act of creativity.

The Shakespearean plot remains intact. It has Prospero forced by a storm to live in exile on a remote island with his daughter Miranda, crew members and resident sprites and monsters such as Ariel and Caliban. Through the magic gathered from the valued books, Prospero invokes a tempest to wreck a ship containing several of his former turncoat compatriots who have come searching for him. Ashore, Prospero’s untrustworthy friends join with the beast-like Caliban in a plot to kill him. 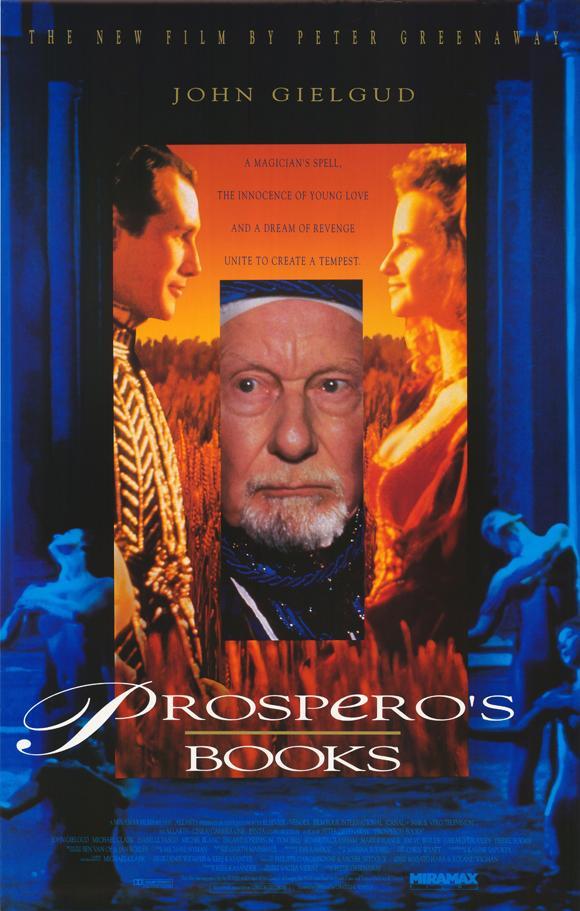