“The epic works as an observant and cynical look at Poland’s social classes and industrialization.”

It’s based on a 1897 novel by Wladyslaw Stanislaw Reymont. It was made for Polish television. The Polish Jewish director Andrzej Wajda(“Ashes and Diamonds”/”Kanal”/”Samson”), Poland’s greatest living filmmaker, explores Poland’s difficult transition in the late 19th-century from feudalism to the Industrial Revolution. The historical drama shows the wide gulf between the bosses and the workers, how the factory girls were vulnerable to sexual abuse at the workplace, the power struggle among the wealthy to hold onto their fortunes, the corruption in all levels of society, how most of the vile merchants of the period were Jews and the daily cruelties of the times.

Three energetic young men of different ethnic backgrounds and stations in life, Karol (Daniel Olbrychski), Moryc (Wojciech Pszoniak) and Maks (Andrzej Seweryn), pool their meager resources and vow to open their own textile factory in Lodz as partners even though they don’t have the money to pull it off. They fool themselves into believing they are doing it to make a better product and at the same time improve working conditions, and vow the factory will stand for trust and equality. The men are aware that it’s risky building a new factory, since the current factory owners and merchants, who are mostly Jewish, are in a cutthroat business and not above resorting to criminal acts to close down competition or prevent the competition from getting loans. Karol is the well-regarded Pole, who is the commanding factory director for the despotic crippled German Jewish aristocrat factory owner Herman Bucholz (Andrzej Szalawski), Moryc is the shrewd well-connected Jewish international investor and Maks is the impoverished nobleman whose industrialist family own an obsolete textile mill that is close to going under.

When the trio eventually finagle their way into opening their dream factory, Karol’s impregnating the zoftig vulgarian wife (Kalina Jedrusik) of a wealthy Jewish factory owner (Jerzy Nowak) leads to his uninsured factory being torched and the partners ownership plans are ruined at the time. With this Karol goes against his father’s (Tadeusz Bialoszczynski) wishes and breaks off his engagement with the warm-hearted Polish country noble Anka (Anna Nehrebecka) and marries for money the dull daughter (Bozena Dykiel) of a wealthy German Jewish factory owner. The transformation into a rich pig for Karol is complete, as he becomes fully governed by greed and emerges as a ruthless industrialist with no concern for his workers. It ends with the now established family man factory owner Karol ordering the soldiers to fire on the workers during a strike.

The epic works as an observant and cynical look at Poland’s social classes and industrialization, letting on how worshiping the Golden Calf negatively changed the values of the country and enabled the middle-class to chuck their traditions even if they were worthy ones in order to keep up with the crass materialist trends of the times. 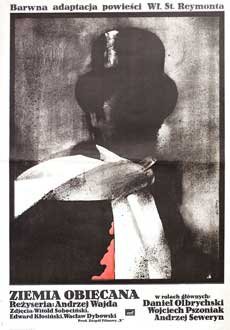 MAN WHO SHOOK THE HAND OF VICENTE FERNANDEZ, THE