“The comedy could have been funnier and more imaginative. I wanted to like it better.”

A low-budget film about a daydreamer trying to enliven his dull life and deter his alienation from society with his alter ego acting as a super-hero in his dreams, that are inspired from movie lore. It’s in the order of the fantasy film entitled The Secret Life of Walter Mitty. Though funny in spots and a treat for film buffs because of all the film clips used and all the movie references, the comedy could have been funnier and more imaginative. I wanted to like it better. Writer/director/editor Harry Hurwitz (“Fleshstone”/”The Comeback Trail”), a painter and print-maker, keeps it too much like a comedy act by mimicker Chuck McCann, whose imitations of Laurel and Hardy, Bogie, the Duke and Jimmy Stewart are first-class but they overwhelm the slight nostalgia story. It’s shot in B/W with a hand-held camera.

It opens with midtown Manhattan projectionist Chuck (Chuck McCann) runninga Gerald McBoing Boing cartoon before the main feature gets stuck and the audience hisses as he fixes it. Then reacting to a radio news report of an old man mugged, Chuck dreams he’s a serial super-hero, the fictional Captain Flash, and comes to the rescue, and as a result meets and dates the vic’s beautiful daughter (Ina Balin).

The villain is Chuck’s mean-spirited bossy theater manager, Mr. Renaldi (Rodney Dangerfield, debut film), who gets off berating Chuck and the ushers in the Times Square regal Palace Theater, and in Chuck’s dreamworld is portrayed as the evil Bat.

The pic’s charm is showing the old film clips from films like Birth of a Nation, Intolerance and Sergeant York, and a coming attraction trailer entitled The Terrible World of Tomorrow. It flubs when it edits Chuck into the Rick’s bar scene in Casablanca, as that infringement weighs the clip down with too much Chuck. Audiences never warmed to it, but the pic was valued by the esteemed Museum of Modern Art as one of the most important films of 1971 and was preserved as an American classic. 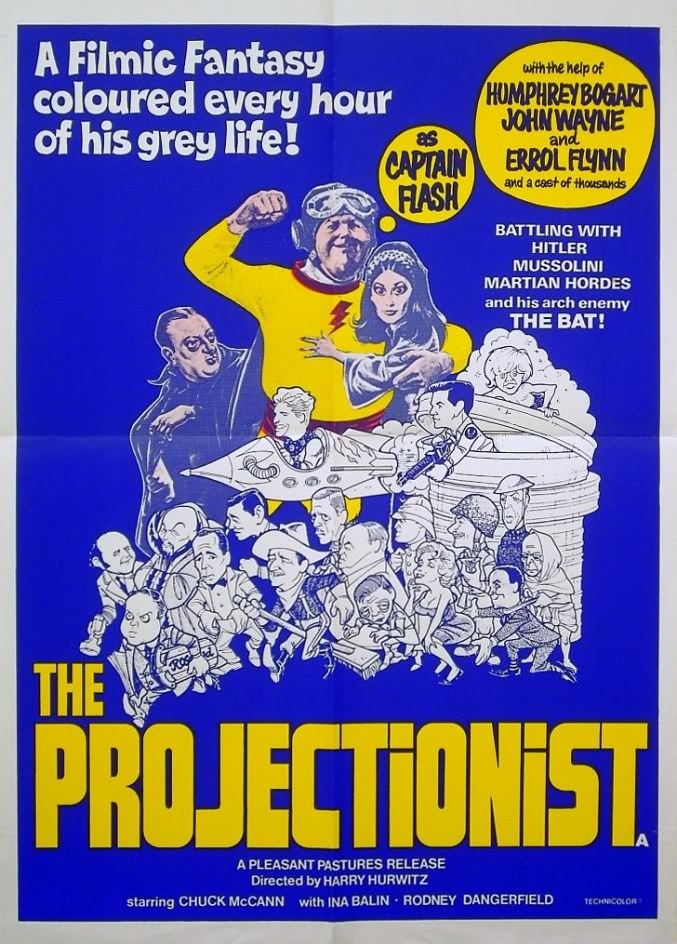