PRIVATE AFFAIRS OF BEL AMI, THE

“That it is a forgotten film today, is unfortunate.“

A talented ensemble cast does justice to the adaptation of Guy De Maupassant’s “Story of a Rogue.” It’s a drama about a heartless cad, Georges Duroy (George Sanders). The talentless journalist stealthily makes his way to the top of 19th century Paris society by breaking the hearts of five women he used to advance his career. He foolishly ignores the love of the only woman who loved him unconditionally and was the only woman he ever loved. It’s directed with great skill for character development and craftsmanship by Albert Lewin (“Moon and Sixpence”/”Pandora and the Flying Dutchman”/”The Picture of Dorian Gray”), who also writes the script.That it is a forgotten film today, is unfortunate.It might be stuffy, outdated and too bent on being moralistic; but, it’s literate, elegant and makes well-taken points that such ruthless scoundrels as the one played by Sanders couldn’t operatewithout society being so hypocritical–with society being more the villain here than the unsympathetic egotistical rogue protagonist, who is considered by the filmmaker to be more or less a product of a corrupt society .

Warning: spoilers in the paragraph below.

Soldier Georges Duroy returns to civilian life broke in 1880 and hangs out with the swinging Folies Bergere crowd drinking in cafes and living the life of a wastrel. Bad boy charmer Georges runs around with a cafe dancer (Marie Wilson), but dumps her when he begins his calculated social climbing moves and she’s on the lowest wrung. At a Parisian cafe Georges runs into his old army buddy, Charles Forestier (John Carradine), a newspaper journalist. Charles gets him a job on the paper owned by the snobbish tycoon Monsieur Walter (Hugo Haas). At a recital, Georges meets the young widow with a daughter, Clotilde de Marelle (Angela Lansbury), and even though she realizes he’s a bad egg she can’t help loving him and calling him Bel Ami after a song they danced to on their first date at a dancehall for the common folks. When the sickly Charles dies of tuberculosis in Cannes, Georges dumps Clotilde to marry Charles’ prim widow Madeleine (Ann Dvorak). He views this as just another step up the ladder–a marriage of convenience, as he cashes in on her good name among the elites to get valued intros to prominent people. While married Georges begins an affair with his publisher’s unhappy wife (Katherine Emery). When Madeleine surprisingly inherits a small fortune from an elderly admirer, a father figure she knew from her childhood, Count de Vaudrec (Wyndham Standing), Georges uses the law that holds women as second-class citizens, that mandates that the husband approve the inheritance or else it’s not permitted, to swindle her out of half of it. He then sets her up in a compromising position to be with his nemesis, the finance minister Laroche-Mathieu (Warren William), and uses that frame-up to file for a divorce. After ruining Laroche’s political career over a stock scandal he got wind of through Mrs. Walter, Georges now schemes to get a title for himself by legally stealing the name of the Cantel family who supposedly all have died out. Georges then asks Mr. Walter for his permission to marry his 16-year-old daughter Suzanne (Susan Douglas), promising he will have a title the old man covets. The lovesick Suzanne, who will inherit forty million francs, wants to marry him and no one else, so the reluctant father yields against his better judgment. But the spurned Mrs. Walter is so filled with hate for her phony lover, that she gets word to the only Cantel (Richard Fraser) still living, someone Georges didn’t know was still alive, and he returns from his withdrawal from society to Paris to challenge Georges to a duel. In the pistol duel, both get shot and die.

Also tacked onto the film is a painting drawn by Max Ernst called “The Temptation of St. Anthony.” 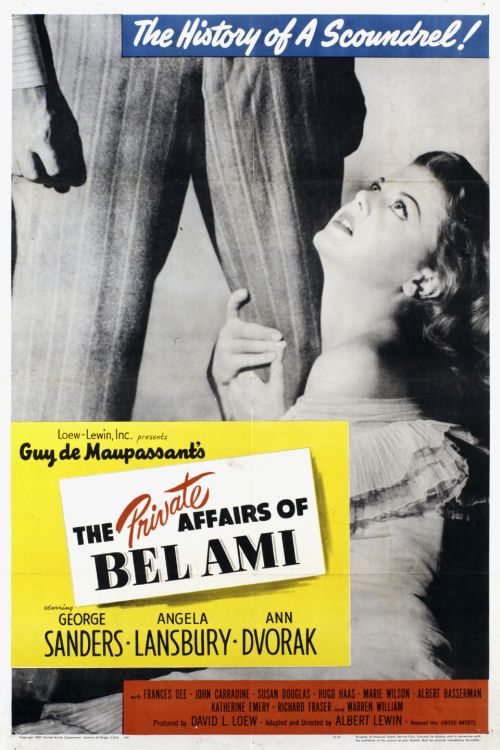 An adaptation of Guy De Maupassant’s “Story of a Rogue,” with an excellent cast to perform it. A man gets ahead by using women and then denying…