PRIVATE LIFE OF HENRY VIII, THE

“It’s still a superb film even if it has become outdated.”

Britain’s most commercially successful film ever, made on a modest budget, is the Alexander Korda (“That Hamilton Woman”/ “Rembrandt”) directed historical comedy and biopic on the 16th century English monarch, Henry VIII (Charles Laughton), who had six wives. It was the only time Laughton, 33 at the time but looking old enough to play the 50 year-old king, ever won the Oscar, and deservedly so for his animated portrayal of a bawdy king. The Lajos Biro and Arthur Wimperis screenplay was loose with the historical facts, as it made it instead an amusing study of the corpulent king. It’s still a superb film even if it has become outdated.


The six wives were: Catherine of Aragon, the spiteful first wife, dumped by the king (whose marriage was not depicted on screen); Merle Oberon as Anne Boleyn-the beheaded for treason ambitious 2nd wife; Wendy Barrie as Jane Seymour-the stupid 3rd wife, who died at childbirth after giving birth to a much wanted son; Elsa Lanchester (who became Laughton’s real-life wife)-the ugly and ludicrous Anne of Cleves, a German, who talked her way into getting an annulment of the marriage, which pleased both parties; Binnie Barnes as Katherine Howard, the executed 5th adulterous wife, a lady of the court, who loved the king’s squire Thomas Culpeper (Robert Donat); and Katherine Parr as Everley Gregg-the 6th wife who henpecked the once ribald king by acting more as a nurse to him than a wife. The film ends with Henry talking to the camera and saying: “The 6th wife was the best of them and the worst of them.”


The film is best remembered for the obese tyrannical Tudor monarch roaming around the palace displaying his temper and appetite for sex, and coarsely eating out of his hands mutton and chicken legs– throwing the bones over his shoulder when finished. 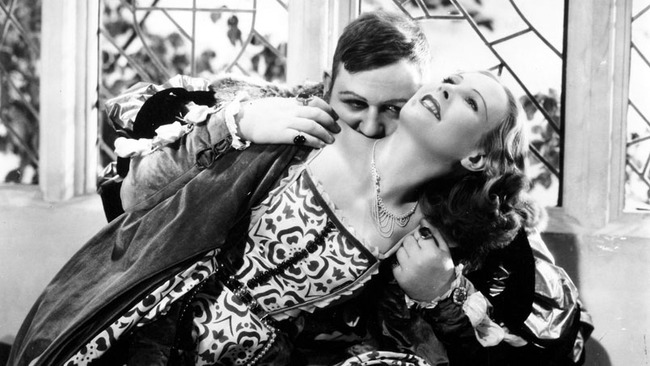 LAND OF STEADY HABITS, THE