Antonia Bird’s provocative film about the Roman Catholic Church is set in inner-city Liverpool, and is meant to be shocking rather than audience friendly or obsequious to the church. Priest has a lot to say about dogmatic certainty in the church, celibacy for priests, and the moral question of what to do when hearing of sexual abuse against a minor in a confessional. In some sense this is a morality play (a father has incest with his daughter but the church can’t act, while a priest is condemned for gay love with a willing adult), but in the larger sense it questions the Catholic religion’s purpose, its dogmas and its spiritual role in the modern world.

The film’s strength is its unswerving viewpoint and the challenge it throws down to the church to confront issues it is not willing to face. The film’s weakness is in its overwrought melodramatics and how each character is labeled with a certain view and advocates that belief in a less than dramatic way. Overcoming the sometimes trying dialogue is the superb understated performance of Tom Wilkinson as Father Matthew Thomas (he’s the voice of reason, expressing the director’s slant) and Robert Carlyle (the voice of sensual love) as Graham, convincingly playing the gay lover of Father Greg Pilkington (Roache). The later is the focus of the film, and he’s a stand-in for the certainty of the church and what happens when the church comes under attack for its dogmas and is rocked with inner conflict.

Father Greg newly arrives at the working-class Liverpool parish. He’s uptight and rigid in his philosophy, humorless in his Catholic beliefs, dutiful in his religious practice but unable to see beyond the letter of the law, and certain that the church has all the answers. When confronted with his older colleague, Father Matthew’s sexual relationship with the rectory’s black housekeeper (Cathy Tyson), Father Gregory hereby acquires a new father figure who doesn’t judge others and preaches about social causes and rationally defines the church’s doctrine by breaking down what is right and wrong. That part of the film was an uninspiring long discourse that seemed needlessly tedious, and was preaching to the choir. But it showed a double-standard in the church for breaking the vows of celibacy: that a heterosexual priest can if he is discrete, get away with having a consenting woman mistress. A homosexual, as it is later shown, cannot.

Emotionally spilling over with inner turmoil and loneliness, Father Gregory literally comes out of the closet and dons civilian clothes to go to a gay nightspot. Here he meets Graham and in anonymity spends the night making love with him, but leaves rather than tell him that he’s a priest as he wrestles with his love feelings. But at a later date Graham sees him as a priest and becomes a worshiper in his church hoping to keep the relationship going. At about this time Father Gregory hears in a confession from a teenage girl Lisa (Tremarco), that her father (Pugh) is sexually molesting her. Since the girl doesn’t want him to tell anyone else, the priest is trapped by his religion’s vow of silence and can’t get the girl the help she needs. When he faces the incestuous father outside the confessional booth, the father becomes a self-righteous advocate for incest and refuses to stop abusing his daughter. The film’s plotline centers on both dilemmas converging on the guilt-ridden priest. Father Gregory’s certainty in his religious beliefs are shattered with about 40 minutes left to go in the film, as he becomes the judge who is now judged by his worshipers and superiors (the bishop tells him: “piss- off out of my diocese”) when it’s discovered he’s gay and is helped only by the Christian spirit of Father Matthew. Alas, Father Gregory finds redemption through his gay experience and by sharing the suffering others feel, as he becomes more human. He also learns to love and accept others even though they don’t measure up to the certainty the church avows.

The film’s heart and message was in the right place and that it got under the skin of the Catholic League, enough to have the film banned, meant it did a lot of things right. But I was not won over by the film’s melodramatics or its overall intellectual shallowness except to recommend it as an in-your-face confrontational film that rails in an emotional way, to my heart’s delight, against the rigidity of the church. 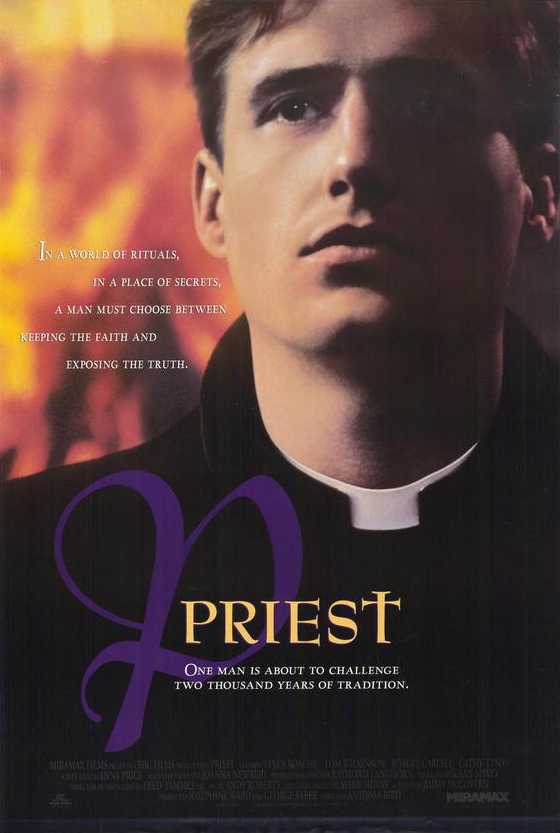