A great low-budget heist film noir. In a remote part of Utah a gang robs a train heading for San Francisco with ten million in gold. They overcome the train by blocking it and using tear gas to overcome the motorman, and while wearing white stockings to cover their faces — they remove the gold mint onto their truck.

The gang members are: Eddie, the college educated leader and brains behind the operation, who is pulling off his first job; Skeets, who just got released from jail and is despondent because his wife died– he now plans to take his teenage son to Rio to live in luxury; Frankie, a race car driver barred from racing for life because he failed to follow the track rules during a race; Commando, a happy-go-lucky bachelor, who works as a stuntman; and, Roly a regular truck driver with a chewing gum habit.

The plan is to travel in three different trucks: a furniture moving van, a truck carrying coffee, and a chemical tanker. They are separated by thirty minute intervals, with the gold split in each truck and hidden, as they plan to reach Los Angeles and melt the gold into the fenders of the three cars they purchased under false names. They will then load them onto a boat they will board to take them to Lisbon.

Roly leaves first carrying the furniture, but he panics at a roadblock and is killed when he tries to make a run for it. The next truck loaded with coffee, driven by Commando and Skeets, is nailed at the weighing station. Commando had just killed a gas attendant in Nevada when he dropped his gun and panicked by killing the old man. Eddie and Frankie get a close call at the weighing station but they are the only ones to reach LA. Fran, Eddie’s girlfriend, meets them at a foundry where they melt down the gold and put it into the car bumpers and chrome.

The next morning, on their way to the boat, they get into a fender bender on the crowded freeway as a woman driver gawking at a traffic accident rams them and when the police try to separate the cars the chrome becomes loose revealing the gold. Frankie is shot trying to draw his gun; Eddie gets crushed to death trying to jump off the overpass onto a passing truck; and, Fran gets captured trying to run away.

The gang is shown to be a bunch of losers who foul up a great plan by their bad luck, insecurities, and their plan being too complicated for them to handle despite how marvelously it was planned out. Perennial losers in filmdom, Elisha Cook, Jr. and Stafford Repp, fit right into this plot. It made for a very entertaining film. 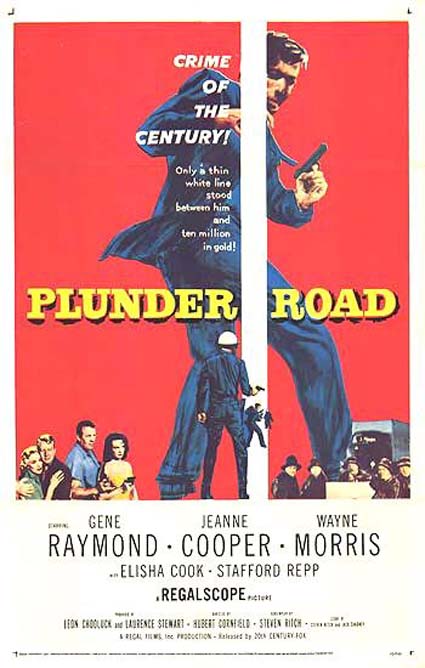