“The comedy attempted is perverse and dry, while the mood of the film alternates between being melancholy and less melancholy.”

Rainer Werner Fassbinder’s made for German TV film, his eleventh and made when he was only 24, is an updated adaptation of Marieluise Fleisser 1929 play. This work is influenced by Godard’s political films and Douglas Sirk’s melodramas. It especially appealed to Bertolt Brecht. This was Fassbinder’s first film to be invited to the Cannes and New York Film Festivals. It’s the story of a group of young German army recruits called pioneers and their relationship with the small town women of Ingolstadt, as their assignment is to build a wooden bridge across the Altwasser. They seek relief from their boredom with booze, by acting rowdy and by having sexual affairs with the local women. Fassbinder uses the film to explore the themes of class differences and his belief that love is simply another word for war. Sex is explored from its dark side, as there was not one bit of warmth offered in this gloomy melodrama. It was too stagy and the cruel ones were depicted in too hamfisted a manner for it to be as effective as it could have been. It’s more or less an academic exercise where its ideas are better presented than the action on the screen. The comedy attempted is perverse and dry, while the mood of the film alternates between being melancholy and less melancholy.

Alma (Irm Hermann) and her friend Berta (Hanna Schygulla) are twenty-year-old single housemaids from the lower classes who enthusiastically welcome the excitement that the new arrivals bring to their routine lives. Alma has just been fired and sees her only hope in her relationship with the soldiers, who are also from the lower classes serving in the peacetime army and are held up as inferior to the civilians except that they score women attracted to their uniform. Alma’s a loose tart who makes it a habit of picking up as many of the soldiers as possible and charging them for it, while Berta also finds hope in the pioneers. She naively searches for true love and goes after a soldier, Karl (Harry Baer), whom she fantasizes she’s in love with. But he turns out to be a womanizer who shatters her illusions further by wickedly telling her: “Love’s not necessary.” The son of her household master, Fabian (Brem), is too socially awkward and tongue-tied to induce the young beauty to give up her notion of marrying for love and marrying him for security and status. When the pioneers finish and leave town, Alma sets her hooks into Fabian by tempting him with her sexual prowess. Alma, in the meantime, after a poke in the park with Karl and rejection, has lost her ideals and is prepared to spread her legs for anybody.

The sergeant (Klaus Löwitsch) identifies himself as one of the superior people because he gets more pay than those he commands and he has power over them, and he identifies with the superior civilians in town. But they only use him to establish control over the soldiers and do not consider him an equal as much as someone employed by them to keep things in check. The sergeant attracts one of the maids, Frieda (Egerer), not because she loves him but because he’s her way to improve her lot in life.

Karl’s army buddy is a black man named Max (Günther Kaufmann), but nothing is made of his race. Instead, Max is the typical soldier who wants to get as many women as he possibly can and playfully take away as many women from his buddies as he can. His idea of a good time is getting boozed up and to go whoring.

To its credit, the film wrestles with some very complex themes. It sometimes breaks through its structured formalism and becomes lyrically approachable, but not often enough for me. It’s filled with such testy slogans as: “When there’s no war, you have to make one.” “Every person is important, they just don’t realize it.” 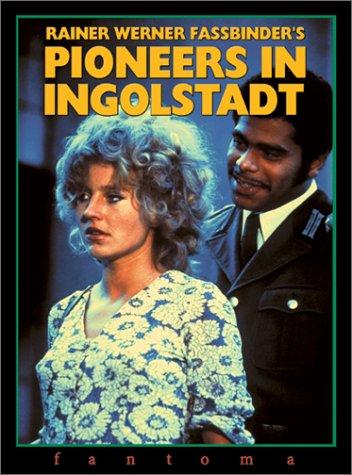