PICTURES AT AN EXHIBITION

“I think this film will please mostly fans of ELP but doesn’t have legs to stretch further afield.”

Nicholas Ferguson filmed this historical documentary of British progressive rock group Emerson, Lake & Palmer in 1970 performing a now legendary concert that was staged at the London’s Lyceum Theater on December 9th. ELP was supposedly the first rock group to offer their artistic interpretation to a classical piece in a concert and made part of their repertoire. They converted Mussorgsky’s Pictures at an Exhibition into a rock arrangement that was risky but turned out well, as the group showed they had the musical ability to pull it off despite their glitzy appearance as rockers and their hyper antics while onstage. Keith Emerson is energetic making the keyboard the main instrument; Greg Lake does vocals and plays a low-key acoustic guitar; while Carl Palmer excels as a drummer. It’s the music of choice for those mellow trippers, who flocked to the more cerebral inclined group because of its recognizable uniquely impressive subtle metal sound (as opposed to heavy metal music). They seemed to be in their element playing the 19th-century Mussorgsky’s music with a rock fervor and a dash of inspired madness.

There were two things I didn’t care for in the film. I found it puerile that Emerson used a synthesizer input device to wipe his butt to make music and those garish animations of cartoons, pop culture and assorted psychedelic images were a real turn off. They did not transfer well from the acid days of the 1970s to the new century, and seemed more tacky than innovative.

I think this film will please mostly fans of ELP but doesn’t have legs to stretch further afield, as classical music enthusiasts might not appreciate the way the rockers played light and loose with their great Russian composer. 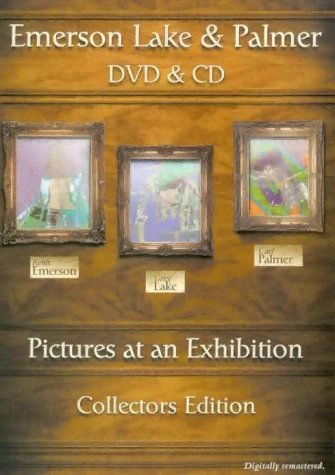