In Robert Bresson’s brilliant black-and-white “Pickpocket,” a meditation on the human condition, Michel (La Salle) is an unsettled polite young man who chooses to be a pickpocket rather than find legitimate work. He lives in a small garret flat, with just a cot and many books. We first see him get up enough nerve to pickpocket the handbag of a well-dressed middle-aged woman patron at the racetrack. As he leaves the track his joy at success changes to concern as the police bring him into the stationhouse for questioning, but release him for lack of evidence.

Michel meets his friend Jacques (Leymarie) and mentions that he’s looking for regular work. But Jacques is not convinced, and is confused by his friend’s strange actions of not following up on the employment leads he offered him. On the Paris Metro, Michel spots a skilled pickpocket operating and learns from him the art of the craft. He soon has amazing luck and is working all the lines of the Metro as a petty thief. One day he’s approached on the Metro by a well-dressed man who demands his wallet back or he will call the police. This man turns out to be a professional thief (Kassagi), who teaches him everything about pickpocketing. Michel is soon part of this smooth pickpocket team, as he can’t resist the thrill of stealing.

During this time frame Michel’s mom (Scal) gets bedridden and is dying, but he becomes too ashamed to visit, probably, fearing she’ll sense something is wrong. His mother is being cared for by an attractive young neighbor named Jeanne (Marika Green), whom he gives some money for his mom and promises another visit. Jeanne is Jacques’s lover.

As Michel’s pickpocketing skills grow, so does his confidence and desire to continue taking risks. He feels either so confident that he can get away with anything or wants to get caught, as he stirs up a cat-and-mouse relationship with the police inspector (Jean Pelegri) by taunting him to show how smart he is to get away with his crimes. The inspector’s the same one who released him over the racetrack incident and acts concerned, as if he were a priest. Though suspicious, the inspector tries to let him know he can’t get away with his crimes (unchecked desires!) and that he should return to his studies (spiritual quest!). When Michel’s luck sours and Jacques tips him off that Jeanne was brought into the police station for questioning, he flees to Milan, Rome, and London for two years, but returns to Paris broke and back to a life of crime.

Bresson’s austere tale was inspired by Fyodor Dostoyevsky’s classic novel Crime and Punishment. It’s a chilling work that leaves room for many interpretations of the petty thief and why he gets such a thrill from breaking the law. Not much info is shared about any of the characters, and the dialogue is sparse. Though there’s plenty of feeling boiling over from the inner being of Michel, but what’s presented is a cold representation of someone who is confused about who he is and is self-destructive and suffers from an inferiority complex he masks by pretending to be superior. He acts brazen like the hero in Dostoyevsky, to see if he can operate outside the normal boundaries of morality as he seeks to prove that because he’s superior he can get away with things ordinary mortals can’t. It’s a study of a man who is obsessed and needs to find answers on why he should live. The darkly Catholic Bresson’s tale allows redemption to be equated with a jail sentence, as the imprisoned Michel at last finds peace with himself when locked up and is forced to curb his wanton desires. As a result Michel now can find out what it is he really wants. Bresson elevates Michel’s transgressions into a simple spiritual tale, as the condemned man’s fate is changed by love and once again he is connected with mankind. 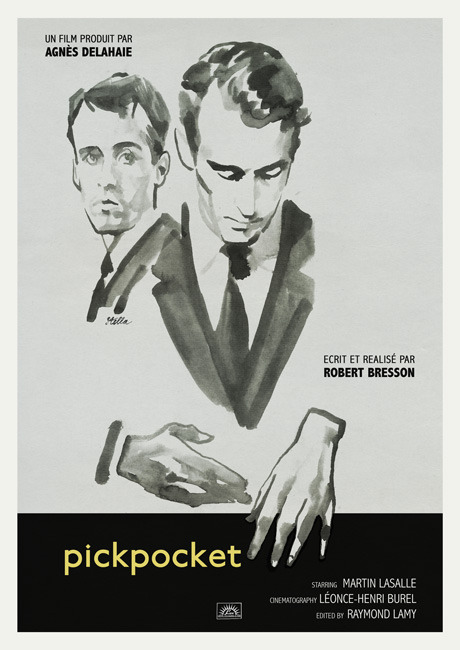