PHANTOM OF THE PARADISE

“Does a slasher’s job in cutting up the greedy music business moguls with its sharp satire.”

This glitter rock/horror/comedy film came out a year before The Rocky Horror Picture Show, but slid under the radar with the hipster crowd even though it had more bite in its parody than the other “Midnight Movie.” It might be writer-director Brian De Palma’s (“Greetings”/”Dressed to Kill “/”Body Double”) best film. This inventive Grand Guignol, a reworking of the Phantom of the Opera story to the rockbiz world, manages to combine Faust with a nostalgic Sha Na Na type of group called the Juicy Fruits, and does a slasher’s job in cutting up the greedy music business moguls with its sharp satire.

Novice songwriter Winslow Leach (William Finley) naively hands over his Faust rock opera for publication to the slimy Philbin (George Memmoli ), a frontman for the ruthless record mogul and club owner Swan (Paul Williams), who rips off his cantata. When Leach tries to get credit for his songs by showing up for an audition for Faust, Swan has his Hell’s Angels-like security guards beat him and kicked off the premise. Two crooked cops plant smack on him, and Leach is sent to Sing Sing for a long stretch. In a burst of hyper energy after he hears his music is a hit, Leach escapes and plots revenge. But he accidentally gets pulled into a record press machine while trying to cause chaos at Swan’s recording studio and gets disfigured. Not wanting to show his hideous face, he wears a silly kind of knight’s face mask and for artistic reasons a black cape as he haunts Swan’s Paradise rock club and forces him to make aspiring singer Phoenix (Jessica Harper), someone he’s smitten with over her voice and looks, the star of the show or else he will kill anyone who takes that part. Betrayed again, Leach as the Phantom gets his final revenge on the malevolent vulgarian Swan as he hides in the wings and sabotages Faust’s opening in a deadly manner.

It’s a flashy pic, filled with excessive but inventive filmmaking style, gadgetry, an animated cast and a terrific cameo by Gerrit Graham as a glamrock star. Though the plot is derivative and the pacing has its momentary lapses, the picis pip. 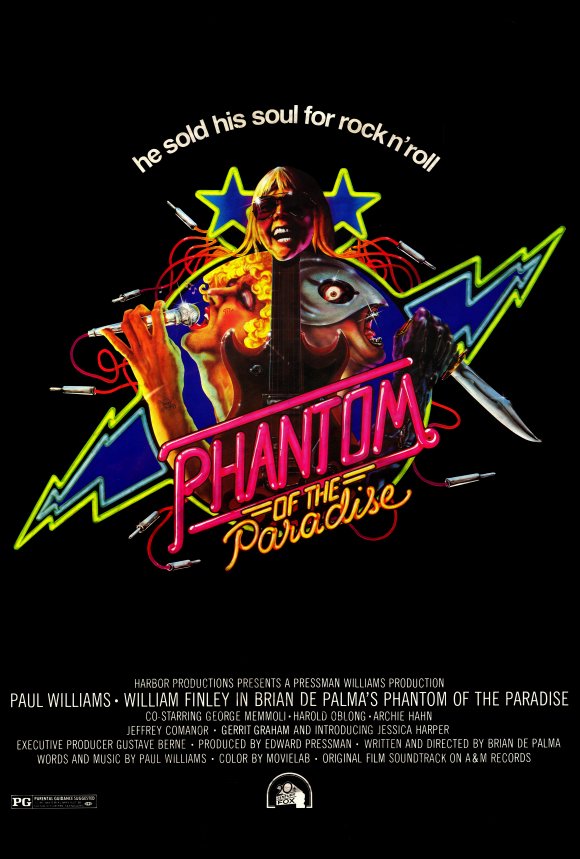