Blacklisted American filmmaker Jules Dassin (“Brute Force”/”The Naked City”/”Topkapi”), ever since 1952, directs while in exile in Europe. Dassin updates in a heavy-handed manner Euripides’ Hippolytus with co-writer Margarita Liberaki. Dassin’s loose version loses the original’s poetry and the ancient’s sensibilities, as it instead becomes lurid and overblown soap opera fit only for modern times.I found it entertaining as a bad film, one that detracts from the Greek tragedy with ludicrous offerings of sex. The visuals of cinematographer Jacques Natteau, shot in a stunning black-and-white, give the pic a good look. Of interest, it got mixed reviews and was a commercial hit in Europe but bombed at the box-office in America.

It revolves around alove triangle between wealthy workaholic Greek shipping magnate Thanos Kyrilis (Raf Vallone, Italian actor), his lonely seductive second wife Phaedra (Melina Mercouri, Greek actress–future wife of the director) and, from his previous marriage, his first-born 24-year-son Alexis (Anthony Perkins, American actor).After christening a new boat named Phaedra in Greece, Phaedra is persuaded by her husband to go to London and urge his estranged beloved son Alexis to return to Greece for the summer. The son and step-mother find an attraction to each other and carry on a steamy affair in Paris. The lovers return to see Thanos at his residence on the island of Hydra, with Alexis overcome with guilt. Meanwhile Thanos rejoices to see his son again and makes plans for him to be part of the shipping business and to marry, Ercy (Elisabeth Ercy), the daughter of his rival in the shipping business, someone he’s about to have a business merger with.

Tragedy fills the third act, as the jealous Phaedra can’t let go of Alexis and tells her hubby about the affair. Thanos goes berserk and rails verbally against his wife and beats his son. The shamed Alexis commits suicide by driving his car off a cliff, while the despondent Phaedra commits suicide by taking an overdose of sleeping pills.

A miscast Perkins makes for an unconvincing lover, which doesn’t help this depressing pic; a film that offers precious few psychological insights into the tragedy. Instead Dassin offers an edgy hard look of contrast between the lives of the super-rich and the super-poor. 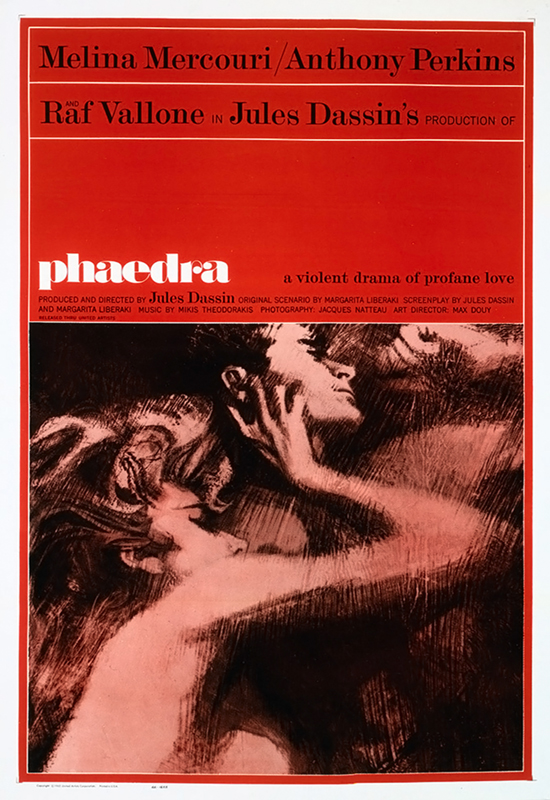 MOONLIGHT BY THE SEA