“It’s a vibrant film, at least, one that brings to life some of the ups and downs of contemporary family life in India.”

Chicago raised and born film-maker of Indian ancestry, Prashant Bhargava, sets his mostly satisfactory but touristy feature film debut as director, a low-budget indie, on the site of the colorful old city of Ahmedabad, during the Uttarayan, the annual January festival that’s known as India’s largest kite festival.

Wealthy Delhi businessman Jayesh (Mukkund Shukla) returns to his Western hometown and decaying once majestic ancestral home in the heart of the city for a surprise two-day visit to his family after an unexplained absence of five years. He comes without his wife, attending instead a wine tasting event, but with his attractive worldly twenty-something daughter Priya (Sugandha Garg).

The illiterate family matriarch Ba (Pannaben Soni), Jayesh’s mom, greets him suspiciously after he sneakily tries to get her to sign a document about selling her house (at the end, we learn her son is trying to get his way with the family by trying to move them to Delhi with his offer of buying them a new condo and selling their old house). Jayesh is also greeted by his likable widowed teacher sister-in-law Sudha (Seema Biswas), who runs things for the dysfunctional family and seems friendly to him and not envious of his success like others in the family. The most resentful family member is Chakku (Nawazuddin Siddiqui), his ne’er-do-well nephew, the son of his late brother and Sudha, a conflicted character who is strangely always around street kids acting to them sometimes supportive like an older brother and sometimes like a Fagin-like character. Chakku openly shows anger to his uncle, as he blames him for his father’s downfall over the loss of the family business and his ensuing death due to drinking. This antagonistic relationship becomes the main focus of the drama, as it slowly and murkily unfolds into a clichéd-ridden emotional tale about family jealousy.

The expressive and flirty Priya walks the streets as a tourist with a Super 8 camera and begins a cautious romance with unhappy local shop clerk Bobby (Aakash Maheriya), who was forced to leave college after a year to help his old-fashioned father in his shop. The lovesick Bobby, after one hot Delhi kiss, wants marriage, but Priya only thanks him for showing her a good time and blows cigarette smoke rings at him and expresses astonishment that a pickup date for a few days would expect her to leave all her Delhi friends and her career to stay with him in the traditional but less sophisticated Gujarati city.

On the day of the kite festival there are over four million kites flown on the rooftops and the middle-aged Jayesh joins his childhood friends on the roof to fly their kites, with him obtaining new kites at the last minute when the unreliable delivery boy Hamid (Hamid Shaikh), one of Chakku’s street kids, fails to show up with his special order kites.

The family drama superficially tells of old family wounds surfacing during the visit, while in the background the joyous festival (shot as if it were a tourist board commercial, touting the kite festival as if it were one of the world’s don’t miss tourist sites) makes the men act again as boys. The six main characters take in the sensuous music, the delicious looking home cooking, the nostalgic storytelling from the old timers, the salty rumors from the gossipy females, the dazzling fireworks at night and the splendor of all the kites in the air.

It’s a vibrant film, at least, one that brings to life some of the ups and downs of contemporary family life in India and of how the family has to adjust to live with old wounds not completely healed and with old wealth giving way to new wealth.

Filmed with rich visuals and in a natural way, that would have probably been served better if it were a documentary and not a family drama. It’s also abetted by the impromptu acting from non-professional street kids, who provide the pic with some bursts of energy. When it succeeds it makes one feel part of the family reunion and the traditions of the city. When it flubs, it feels as if hustled at a tourist spot and not understanding what it means for the natives to fly a kite and what all the fuss is about. 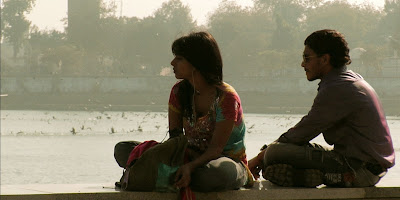