Bloody awful hokum, released as a B film programmer by RKO Pictures. The weakly acted and directed melodrama by filmmaker David Howard (“The Mystery Squadron”/”Daniel Boone”/”The Lost Jungle”) is based on a story that was featured in the “The Saturday Evening Post” by Bruce Hutchison. The annoying screenplay by Daniel Jarrett and Ewing Scottis hard to swallow without gagging, as it tells of a wealthy father calling out his son as a sissy for going to symphony concerts instead of participating in he-man activities.

When the gruff Park Avenue, New York lumber tycoon Mike Curran (Lloyd Ingraham) finds his estranged son Grant (George O’Brien) too soft after raised by dad’s old maid sister, he ships the college grad out to his Timberlake lumber camp in Oregon to toughen him up. Pop is not aware his son is a famous mask-wearing wrestler called the Masked Marvel, who can easily handle the rough job.

At the lumber camp, under a different name, Grant befriends Nick (Bert Hanlon), the camp cook who mangles the English language. Grant also falls in love with Peggy O’Shea (Beatrice Roberts), the daughter of the boss of a friendly rival lumber company. Grant soon uncovers that a crooked scheme is being worked by the foreman of the Timberlake, Ben Morton (Willard Robertson), and Paul Sangar (Ward Bond), the foreman of the neighboring rival lumber company. They hold notes to put the rival out of business, making it seem like it’s Curran who is holding the notes. Sangar does it even though he is sweet on Peggy. The crooks are unable to run Grant out of the camp by having him attacked by thugs or by causing a workplace accident or even when Sangar shows Peggy a magazine photo revealing that Grant’s dad owns the rival lumber company. In the end, the son proves Morton was cooking the books for the last ten years and stealing from the firm and Sangar was sabotaging his firm for personal profit in his criminal venture with Morton. This gets the lumber heir Peggy and his dad’s approval. 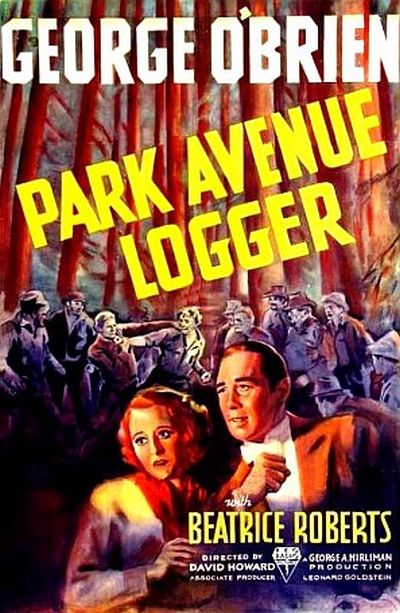