PARIS WHEN IT SIZZLES

Paris When It Sizzles was a rewritten remake of the French film La Fete à Henriette (1952). It’s a well-intentioned bubbly romantic comedy built around star power that never comes off as intended. It never amounts to anything more than an uninteresting mess. Richard Quine (“Strangers When We Meet”/”The World of Suzie Wong”) directs from a story by Julien Duvivier and Henri Jeanson, while George Axelrod handles the screenplay. It reunites William Holden and Audrey Hepburn, who last appeared together in the 1954 Sabrina.

Middle-aged Richard Benson (William Holden) is a successful Hollywood screenwriter living in Paris who has a drinking problem that has put his career on hold. His producer Alexander Meyerheimer (Noël Coward) is in Cannes and wants the finished script turned in for their latest film entitled “The Girl Who Stole the Eiffel Tower.” Meyerheimer gives Richard a two-day ultimatum to finish the screenplay, unaware that Richard hasn’t even started the script. This results in Richard hiring a live-in secretary, Gabrielle Simpson (Audrey Hepburn), to come to the rescue. The two act out the characters they create for the script and soon fall in love for real. The suspense, if you really care, is if they will finish the screenplay before the deadline.

There was nothing in this film that sizzled, including the artificial story and romance. A more appropriate title would have been Paris When It Fizzles. The inside joke was that Holden in real-life was an alcoholic. It seems to have had a great effect on him during the shooting of “Paris,” as he was supposedly on a drinking binge and doesn’t even turn in his usual good performance. To try and spice up this dud, the following stars put in uncredited cameos: Tony Curtis, Mel Ferrer (Audrey’s husband) and Marlene Dietrich. 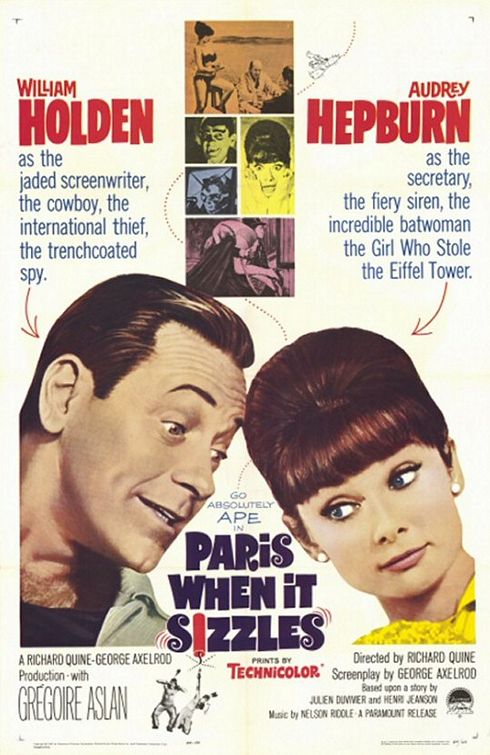