Two-reel favorites Laurel and Hardy make their first feature film (if one excludes appearances in which they were merely featured players in Hollywood Revue of 1929 and Rogue Song). It has a few good gags but overall lags with a slow pace and seems padded; it turns out to be not one of the funny duo’s best efforts. James Parrott (“Girl Grief”/”Do Your Stuff”/”The Music Box”) directs this as a satire on MGM’s hit prison film in 1930 The Big House. H.M. Walker pens the screenplay.

Stan Laurel and Oliver Hardy are arrested as bootleggers and sent to prison after Stan mistakes a policeman for a street conductor and tries to sell him a bottle of homemade beer. The funniest line in the film has Stan ask the prison photographer who takes his mug shot “If they turn out good, can I have one?”

The running gag here is that Stan has a loose tooth that makes a buzzing “raspberry” sound every time he speaks.

The boys are put in a cell with the snarling hardened criminal Tiger (Walter Long) and get roped into a prison escape with Tiger’s men. Ending up in the cotton fields with blackfaces after treating the pursuing bloodhounds as pets, the boys are content to be cotton pickers and live in shantytown. Oliver is even induced while working in the field to sing “Lazy Moon.” Their luck ends when the warden and his daughter are driving past the field and get stuck, and the blackfaced cotton pickers are recruited to fix the car. The warden doesn’t recognize them at first, but when Stan speaks his buzzing tooth sounds an alarm. Back in prison there’s a slightly amusing scene in the dentist’s office, where Ollie gets his tooth pulled instead of Stan and then the dentist corrects his mistake by yanking out Stan’s with undue force. With Tiger attempting another escape, Stan accidentally gets a hold of the smuggled machine gun and ruins the felons escape by accidentally firing the weapon in the mess hall before the plan was to be executed. With the bumbling comics handling the gun and causing a panic by firing the gun wildly, the prisoners are forced back in their cells and the warden declares them heroes and issues them pardons. 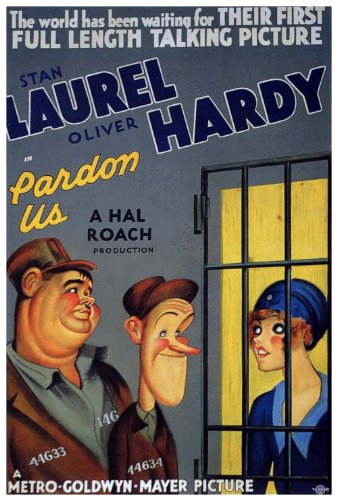