Pyotr Lutsik’s unique political thriller, his debut film, steals its title from the 1933 classic novel of Boris Barnet (of which it’s a smartly made reworking). It takes the form of an allegory that depicts chaos and corruption in modern Russia as a result of the breakup of the Soviet Union and the new capitalism that’s played with different rules. Its advertisements suggests in its blurb that it’s “Too dangerous to show in Russia–they say it will cause a revolution.”

This set in modern Russia tale plays as a disturbing and at the same time droll comical look at a country in the middle of an unsettling transformation. The narrative, shot in a boldly shaded dark black-and-white, plays out as a fanciful yearning for vengeance tale on the greedy capitalist wrong-doers who steal from the simple-hearted peasants.

The story follows a group of gritty peasants from the Urals who are riled up over the injustice that their collective land was stolen. Not knowing who the offenders are, they form a vigilante group to track down the faceless culprits. The men trek through the steppes and invade the home of their peasant comrade, the collective head, to force him to give info as to whom he sold the land to. They succeed only after almost drowning him in an ice hole. This leads the group of four to catch up with a sleaze known as the “Enterpriser,” before he escapes in his luggage-packed car. He is tortured inside his house but doesn’t tell whom he sold the peasant’s land to until his kids are threatened. It escalates to violence when his wife comes out blasting a rifle and wounds one of the vigilantes. His info leads the peasants onto the big city to find the middle-men who set up the deal, whom they quickly torture and slay. While they are on the city outskirts, they sit by a campfire with the snow gently falling and they observe the main building of the capital, a huge monument from the Stalin-era, where the oil oligarch they are searching for now uses as his office. One of them remarks “It’s like an Egyptian pyramid.”

The film reaches its shocking climax when the peasants don ill-fitting suits and make their way into the office of the powerful new boss of Russia, the gloating oil oligarch, who laughs at their misfortune and shows off mineral samples of all the land he’s acquired throughout the world through legal means. He smugly tells these starving peasants, who need their land for food, that he plans to use their land to drill for oil.

Lutsik’s film is a nostalgic reminder of those Soviet propaganda films of the 1930s, but is here taken as a parody of those Stalin-era days. But what remains unclear, other than the satire and the interchanging wrongs from the past and the present, is what’s Lutsik’s take on the thuggish behavior of the modern peasants, whom he clearly sympathizes with but maybe thinks of them as romantic dolts and brutes who can’t change with the times and have lost everything because they are dullards. This ambiguous meaning to all the disturbing and violent events which, I might add is probably as good a version of what’s taking place in modern Russia as any, leaves us alone to ponder what to make of such an ugly mess and the vigilante methods used by the peasants to take back their homeland. 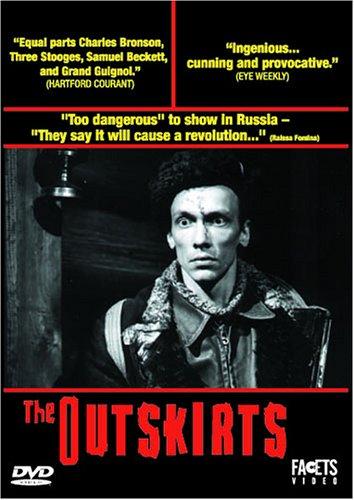