Irving Pichel (“She”/”Santa Fe”/”The Most Dangerous Game”) helms this brisk and sturdy spy drama, set during WW II. It’s crisply written by producer Richard Maibaum and is based on actual research of the Office of Strategic Services (O.S.S.)–a CIA predecessor. There were about thirty O.S.S. agents involved with the film. The spy agency was formed by FDR before we got in the war. During the same time period as “O.S.S.” such films as Cloak and Dagger and 13 Rue Madeleine came out.

Cmdr. Brady (Patric Knowles) specially trains American O.S.S. agents such as John Martin (Alan Ladd), hockey player Bernay (Richard Benedict), middle aged Gates (Don Beddoe) and lady sculptor Ellen Rogers (Geraldine Fitzgerald) to work on the code-named Applejack mission and be parachuted into occupied France to destroy the essential Corbett Mallon tunnel to stop the German invaders from shipping supplies to their troops. The spies are unaware that just around the corner is D-Day. Ellen gets Nazi officer Col. Paul Meister (John Hoyt) to fall for her and uses him to plant plastic explosives in a bust to sabotage a train. The vengeful Hoyt survives to devote the rest of his film time to hunting her down. Meanwhile the OSS is helped by the mercenary German turncoat Amadeus Brink (Harold Vermilyea) and by planting Partker (Richard Webb) in the German Army.

There are just enough thrills to keep this routine and predictable action pic watchable. A romantic story develops as the frosty chauvinistic Ladd thaws out for Fitzgerald to become her love interest when he sees she’s a capable field operative. 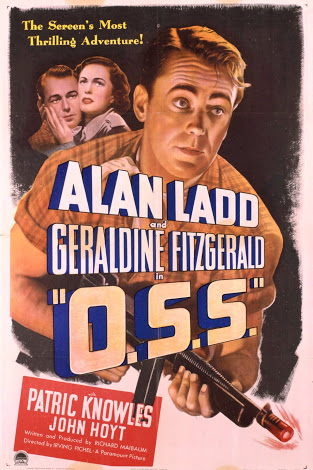