A listless western co-written and helmed by Gene Fowler Jr. (“Gang War”/”Here Come The Jets”). It’s co-written by Louis Vittes from a story of his.

In 1846 President James K. Polk (Addison Richards) plans to extend the country’s borders to the edge of the Oregon territory and secretly sends military agents posing as pioneers, despite objections by the British. The NY Herald reporter Neal Harris (Fred MacMurray) is sent by his publisher (Ollie O’ Toole) to Oregon to verify Indian attacks on settlers. Harris joins an Oregon Trail wagon train headed by Seton (Henry Hull). Also on the train are agents dressed as civilians, Capt. George Wayne (William Bishop) and soldiers Brizzard (Tex Terry) and Ellis (Arvo Ojala). Others in the party include Prudence Cooper (Nina Shipman), her father Richard (Gene N. Fowler), grandmother Maria (ElizabethPatterson) and brother Jeremiah (James Bell); and the eccentric Zachariah Garrison (John Carradine), who is transporting apple trees to Oregon. A serious love triangle develops over Prudence between Capt. Wayne and Harris, with Harris forced to flee after threatening to expose the military men on the wagon ride. Arriving at Fort Laramie, Wayne is informed his mission has been aborted with the signing of the Oregon Treaty and the start of the Mexican-American War. But Harris is unaware of this and is led by mountain man Gabe Hastings (John Dierkes) to hide with the Arapaho. Harris doesn’t realize the Indians and Hastings are enemies of the pioneers. But Hastings’ mixed-breed daughter Shona (Gloria Talbott) helps Harris escape. Thereby he rides to Fort Laramie in time to warn them of the impending Indian attack, as things conclude with the soldiers successfully defending the fort and most civilians killed.

All other personal problems are straightened out, with Harris quitting his gig as a reporter to live there with Shona and Prudence finding romance with Wayne. 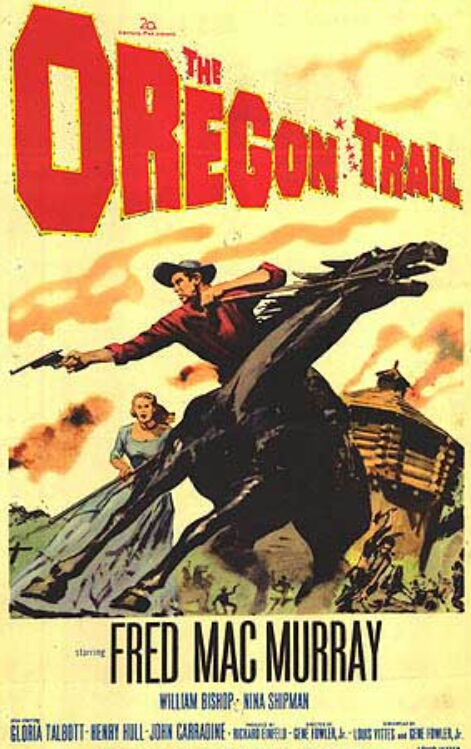 RHYTHM ON THE RANGE