Blake Edwards (“Mister Cory”/”Days of Wine and Roses”/”The Pink Panther”) directs this appealing but thin service comedy. It’s from a story suggested by Paul King and Joseph Stone and written by Stanley Shapiro and Maurice Richlin.

Admiral Matt Sherman (Cary Grant) was the first commander of the submarine the U.S.S. Sea Tiger, which saw action at the beginning of World War II.On the morning of its decommissioning because of age, Matt reminisces about how in 1941, some 18 years ago, he commanded that boat. Matt narrates by reading selected logs to us from the U.S.S. Sea Tiger captain’s journal.

On December 10, 1941, the new Sea Tiger is ready for battle in the Philippines when a surprise enemy attack badly damages it. Although Matt’s boss, Capt. J. P. Henderson (Robert F. Simon), orders the ship grounded, Matt gets permission to make enough crude repairs to transport her to the nearest port. Henderson assigns Matt a skeleton crew. The next day there’s the auspicious arrival of the brash wheeler-dealer Lt. Nick Holden (Tony Curtis), a socialite Naval officer in a spotless uniform who has never sailed before. Viewing himself more as an “idea man” than a sailor, Nick gets appointed to be the new supply officer and since the ship has no supplies, he recruits seamanHunkle (Gavin MacLeod) and a morose sailor called “The Prophet” (George Dunn) to help him raid the local supply warehouse.The crew steal enough supplies from everywhere possible to get the Sea Tiger seaworthy again. The Sea Tiger then goes out to sea and when forced to dock at a Pacific island because of a leak, Nick brings back to the ship a quintet of stranded army nurses —Maj. Edna Heywood (Virginia Gregg), Lt. Barbara Duran (Dina Merrill), Lt. Claire Reid (Madlyn Rhue), Lt. Ruth Colfax (Marion Ross), and Lt. Dolores Crandall (Joan O’Brien). Matt has little choice but to take them to Manila.

The funniest moments come from the following three sight gags: the accident-prone Lt. Crandall causes the Sea Tiger to accidentally fire a torpedo and miss a tanker but land on shore where it hits a truck. The boat also gets an accidental coat of pink paint when their supply of red and white runs low. The pink submarine attracts American bombers, who attack it as an enemy ship until Nick sends up the women’s undergarments–thereby the film’s title. 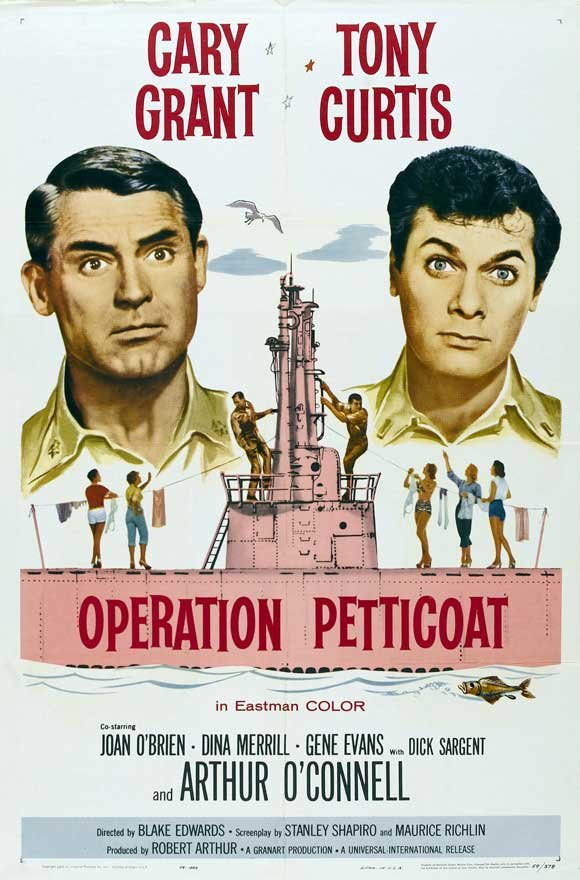