(aka: THE GREAT SPY MISSION)

“Takes an unlikely scenario and ends it with an explosive fantasy James Bond-like finale.”

A big-budget star-packed war drama about spying that takes an unlikely scenario and ends it with an explosive fantasy James Bond-like finale. It seems hard to fathom even though it’s based on an actual story. The pic got a lukewarm reception on its U.S. release. It’s directed by Michael Anderson (“The Quiller Memorandum”/”The Shoes of the Fisherman”/ “Conduct Unbecoming”), who keeps all the characters stuck like cardboard. It’s written by Derry Quinn, Ray Rigby and Emeric Pressburger (the now senior citizen takes on the pseudonym Richard Imrie hoping to be granted a second chance to work by re-launching his writing career as a possible younger unknown writer).

Prime Minister Churchill appoints his son-in-law, Duncan Sandys (Richard Johnson), the Tory deputy supply minister, to head an investigation to determine if the Germans are building long-range rocket weapons and to study photographs for clues while pinpointing possible enemy launching sites. General Boyd (John Mills) supports the notion, but the cynical scientist Professor Lindemann (Trevor Howard) mocks its feasibility. It will eventually be learned that the German high command is working on three projects simultaneously: The V-1 ‘Buzz Bomb,’ the V-2 rocket and a project called the V-10, an intercontinental ballistic missile. Three volunteers, the cocky John Curtis (George Peppard), the cocky Phil Bradley (Jeremy Kemp) and the timid Robert Henshaw (Tom Courtenay), are recruited to pose as German engineers from the occupied countries and transmit information back on the secret operations through an underground network. The men take on the IDs of real German engineers who are deceased, as learned from intelligence. Curtis runs into the wife (Sophis Loren) of the man he’s impersonating and must deal with that ticklish problem, which doesn’t turn out too well for her. Henshaw is recognized by Gestapo agent Bamford (Anthony Quayle), a smooth counter-spy, and gives up his life before he can help the Allied cause. When Bradley and Curtis get jobs at Peenemünde, they get word back to London about the scope of the operation and it’s decided by intelligence to bomb the site before long-range rockets can be used in London. The agents heroically light the way for a squadron of Allied bombers and pay the ultimate price, but the two roguish men make possible the total destruction of the Nazi installation.

The standard Brit spy melodrama offers mild entertainment value, but is instantly forgettable. It shoots for authenticity by having all characters speak in their native language while English subtitles are given. Top-billed Sophia Loren has what is basically a cameo role, as producer Carlo Ponti, her husband, put her in the film in a minor role solely for box office value. The film was shot in England, with London’s St. Pancras Power Station standing in for the underground rocket factory. 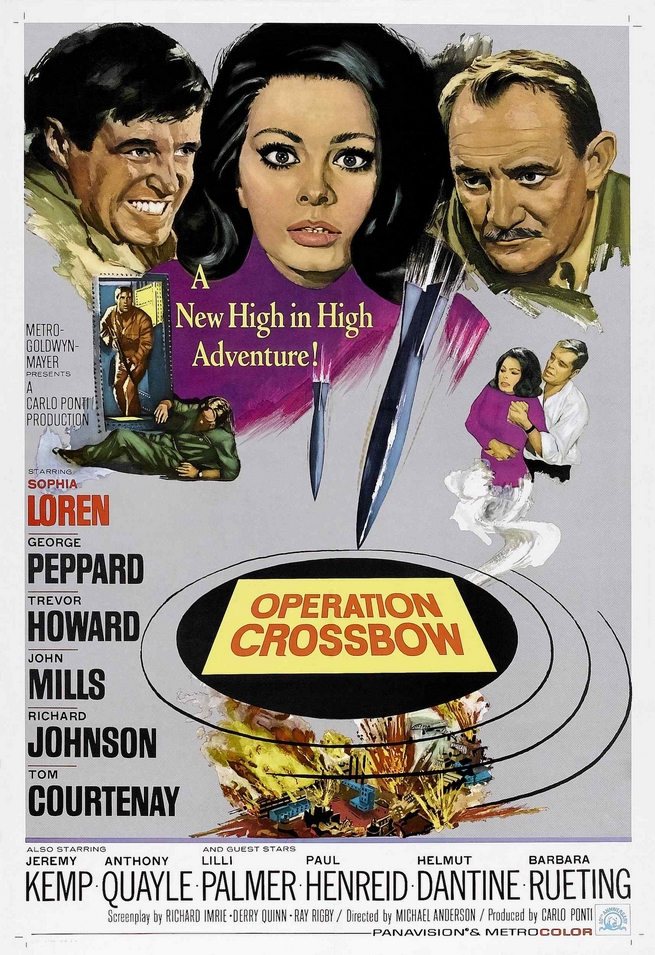