“An intriguing but simplistic drama with comical overtones to its melancholy mood.“

The indie South Korean auteur Hong-Sang soo (“Right Noe, Wrong Then”/”Grass”) crafts an intriguing but simplistic drama with comical overtones to its melancholy mood. The title is derived from one of Walt Whitman’s poems. It’s filled with long takes and plenty of zoom shots.

The observant raw emotional story is about a lonely, suffering noted actress Young-hee (Kim Min-hee), visiting a divorced friend (Seo Young-hwa) in Hamburg, Germany to forget her messy split with a married film director. She becomes so depressed she returns home to the South Korean beach town of Gangneung, but only alienates old friends with her self-destructive behavior.

The story is inspired by the director’s own actual affair with the film’s star Kim Min-hee, which made headlines in Korea and had her called a homewrecker.

The subject turns out to be an emotionally complex character, who is fully examined during the course of the playful but pointed narrative. The director, in this plotless film, tries to find out what love is, as the actress suffers from loss and longing after the affair and is not shy about talking excessively about it to her friends.While Young-hee is sleeping on the beach she’s awakened by her lover’s assistant.

From him she discovers her ex (Moon Sung-keun) is shooting a new film in town. Before you can say maybe they should meet again, we find them in the final scene at dinner and drinking heavily in a restaurant.

Things get icky when the director reads a passage about them from his own book, and gets teary-eyed when he realizes the pain he caused. What’s apparent is that his love for her revolves around his enormous ego and how his heart was broken by her.

The final scene is more than likely a work of fiction. It’s a raging, intimate, bitter and frank look at the dark side of romance that holds little back and therefore the personal film seems awkward at times, even if skillfully crafted by a great director. It seems like the real thing may be fictionalized but is served up as a sort of penance.

The result is an elliptical relationship film that is lyrical and insightful and impactful.Kim Min-hee might be South Korea’s best actress. She won the best actress award at this year’s Berlin Film Festival. 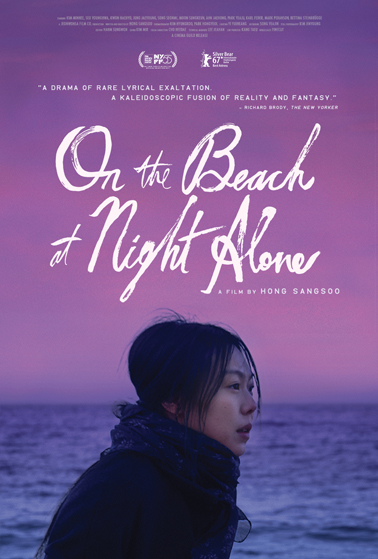