Basically a mixture of sports film and Nazi propaganda film that documents the 1936 summer Olympics at Berlin according to the way the Nazis see themselves as gods and the way they want to present themselves to the world as a peaceful nation. It’s brilliantly directed by Leni Riefenstahl (“Triumph of the Will”), Hitler’s pal and proponent of the Master Race and in her latter years an unsympathetic artist voicing no apologies for the butchers she backed. It was filmed in two parts, ‘The Festival of the People’ and ‘The Festival of Beauty,’ taking some 220-minutes.

Somehow the film transcends its tawdry aim and moves into the realm of art, even though it’s mostly a fascist fawning over and deification of the athletes. It covers the athletes from all countries with close-ups, and we see such things as the entire German women’s team doing an exercise workout in a field. The African-American track superstar Jesse Owens, the star of the Olympics, is shown winning his events (the 100 meter and 200 meter races, the long jump, and helped win the 400 meter relay), but what’s not shown is Hitler snubbing him.

In 1938, with Germany still not willing to show its true colors, they shipped the film out to different countries and featured each country’s own athletes over the other country’s athletes. The English-language version I saw was amazingly deceptive and avoided any references to Hitler or Nazism, only showing the stadium surrounded with swastika flags and Hitler in the audience with his entourage (the Führer has a snit attack when one of the German distaff track stars drops a baton causing the home team to lose). It’s better than most sport films because it looks better, but is not without its dull moments. 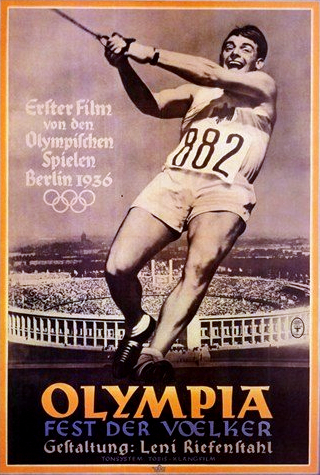