Gregg Araki (“Totally F***ed Up”/”The Doom Generation”) is the one man dynamo behind this scatological romp to nowhere, who zeroes in on teen nihilism in his attack on anything resembling taste or good sense or parental values. It’s the gay director’s third installment in his plunge into the world of “Teen Apocalypse.” A film that is vile and John Waters funny (ugh!) in a way that a vulgar film can sometimes be that is so dopey and irreverent and badly made. It’s bound to annoy the average viewer somewhere along its hyper kaleidoscopic visual way, where maddening random violence, kinky sex, and irritating dialogue (filled with Valley expressions like “Whatev”) go together as well as ham and eggs served in a mosque. But then again, there’s no average viewer (or for that matter, many viewers at all) for this almost unwatchable flick–whose target audience is most probably the teen whose brains have been scrambled by drugs. A film gleefully described by the filmmaker as a ”Beverly Hills 90210” episode on acid.

So boring and worthless that if I were offered less than a king’s ransom to see this film again, I would have doubts if I would want to put myself through such an ordeal again.

Nowhere opens with this heavy quote “L.A. is like nowhere — everybody who lives here is lost.” Araki finds his way through L.A.’s pop culture hedonistic teen landscape of sex, drugs and rock ‘n’ roll, where every teen looks as if they could be a model for a Calvin Klein underwear ad. The filmmaker is obsessed with doomed youths living on the edge of reality and functioning just as well as any Neanderthal would if armed with a club and endowed with a peanut for a brain. It’s a film filled with too many characters (something like 20) who occupy space for a short time and vanish before we can get past their weird look and know anything about them that matters. The only character I could make head or tail out of is the existential hero, the doe-eyed Dark Smith (James Duval), a bisexual romantic who talks himself into believing he’s doomed and the world is soon about to come to an end. He’s a probable UCLA film student whose camcorder is seemingly a permanent part of his shoulder.

The plot is to follow a typical day in the life of Dark. This cutie pie 18-year-old dude just wants to be loved, as he hangs out with his bisexual African-American girlfriend Mel (Rachel True) and her purple-haired, lesbian girlfriend Lucifer (Kathleen Robertson). Dark is spaced out over not having Mel all to himself. But hunky, golden-locked Montgomery (Nathan Bexton) has eyes for Dark, even though he claims he’s not gay. Ultimately, the film turns on Dark’s sincere search for true love which he comes close to finding in the brainless Montgomery, that is until he is transformed into an insect-like space alien by his alien abductor’s at the film’s end.

It all plays out as some kind of tacky fantasy about the teens being hooked on the popular culture, which is viewed as something set in the collective consciousness of all teens. What follows on this typical day for Dark and friends are a series of episodes involving some of the following situations: fucking, suicide, doing heavy amounts of drugs, some barfing, alien abductions, being date raped by a member of the Baywatch cast, TV evangelism, an Armageddon moment, and the usual teen fist fights and angst over sex. There are just too many such wacky incidents to list or try and comprehend. Some might have a taste for such West-coast cool and find it entertaining, but I found it worse than a bad acid trip or playing a game of kick-the-can. 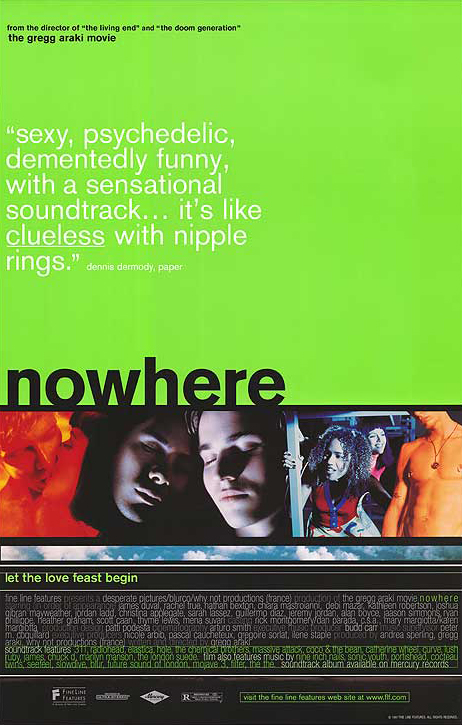