“A top-rate film noir from the master, Alfred Hitchcock.”

Alicia Huberman (Ingrid Bergman) is living in Miami in 1946, just after WW11, as a society playgirl, while her father has just been convicted of treason as a Nazi spy and has been sentenced to twenty years in a trial she didn’t attend.

Devlin (Cary Grant) is a federal agent whose assignment is to get her to spy on some Nazi activity going on in Rio de Janeiro, as he knows from tapped phone conversations she had with her father that she’s against what he did. He tries to appeal to her sense of patriotism and for her need to redeem her family name, but she falls in love with him and probably does it for that reason alone. He is attracted to her, but can’t swallow that she was such a loose woman with a notorious reputation for sex and drinking.

In Rio, Devlin’s boss, Captain Prescott (Calhern), tells him her assignment is to become romantically linked with Alex Sebastian (Rains), who was a friend of her father’s. He’s a wealthy old-time Nazi now living in Rio, with contacts to the I. G. Farben chemical firm. There are many Nazi activities going on in his house, and she’s asked to find out what they are and who are his visitors. Her advantage is that Sebastian loved her before.

The twist in the plot comes when Sebastian asks her to marry him, and Devlin can’t overcome his concern about her past reputation to tell her that he loves her and to stop the marriage. So to please him, thinking what he wants is for her to be a spy for the U.S., she goes through with this sham marriage.

Sebastian’s mother (Konstantin) is overbearing; she thinks Alicia’s a gold hunter and never stops being suspicious of her. Their mansion is filled with many Nazi spies holding secret business meetings and one of them, who goes by the alias of Dr. Anderson (Schunzel), has been involved with smuggling uranium ore in wine bottles which are kept locked in the wine cellar. Devlin gets that info while an invited guest to a party being held there and brings back that valuable info to his bosses, but Alex now realizes his wife is an American agent as he notices the key to the wine cellar is missing on his key ring. He can’t kill her right away without arousing suspicion with his fellow Nazis. They would only kill him for his goof. So he and mom plan to slowly poison her to death and make it look like she died from a sickness.

Devlin now has a chance to redeem himself as he boldly comes to her house and forces Alex, by out maneuvering him, to let him take her to the hospital. He does this in front of all the dangerous Nazi spies watching, as he carries her down the stairs and doesn’t let Alex come to the hospital with him. It was a powerful scene, with a marvelous crane-shot following them down the stairs and sweeping the entire hallway as it caught the tension on all the Nazis and the reunited lovers. This memorable scene is in a class with the final one in Casablanca.

Hitchcock’s film noir is loaded with brilliant shadowy and dark visuals and a main character who trusted his wrong emotion about love. At least Sebastian loves Alicia without questioning her past. Hitchcock has more respect for the twisted but sophisticated Sebastian in this matter than he does for the sexually troubled Devlin. Devlin can’t act on his repressed desire until she’s nearly dead in his arms. Alicia will then be viewed as not such a bad woman, but one who was promiscuous because of reasons she couldn’t come to terms with; such as, a father who was a traitor and the shame that caused her. 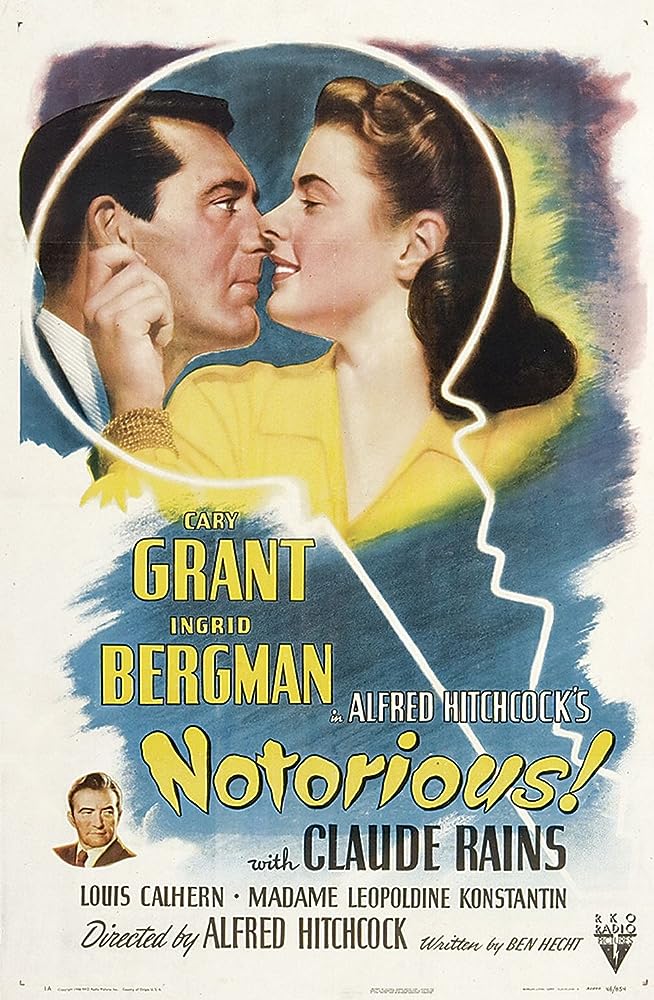