NO TIME FOR LOVE

A made in wartime predictable romantic pic about opposites attracting, that’s corny, filled with contrived situations and forced comical situations. But it’s watchable hokum due to star appeal and good chemistry between Claudette Colbert and Fred MacMurray. It’s about a well-known sophisticated celebrity Manhattan lady magazine fashion photographer Katherine Grant (Claudette Colbert) falling for a nobody macho sandhog Jim Ryan (Fred MacMurray), whom she meets while on assignment to take photos of the men digging the subway tunnel. Though the two don’t get along at first by the end it all works out, as she ditches her wealthy but nerdy publisher boss (Paul McGrath) fiance at the Mirror for Mr. Muscles.

It’s based on a story by Robert Lees and Frederic I. Rinaldo, and is written by Claude Binyon. Veteran director Mitchell Leisen (“Practically Yours”/”Lady in the Dark”/”Easy Living”), the former art director,keeps things simplistic as a Battle of the Sexes and class warfare comedy, as the snobby Katherine must learn to let go of her superior airs and convince the proud democratic sandhog that she really cares for him and is not just after his bod and thereby will marry for love.

Katherine’s sister Hoppy (Ilka Chase) tries to be the rational one in the family, wondering how anyone, no less her smart sis, would not choose wealth over brawn. Darlene (June Havoc) is the floozy ambitious showgirl Ryan lusts after when confused about where he stands with Katherine. That the lovesick photographer hires the cocky Macho Man to be her assistant and her heavy equipment mover because she feels guilty she got him suspended from his job by publishing a photo of him fighting with his fellow sandhogs that got him in trouble with his bosses, is a plot device that keeps the opposites traveling together in the same circles and gives them a chance to get to know each other. To convince the sandhog, nicknamed for his strength “Superman,” that her intentions are sincere, Katherine’s sophisticated panty-waist composer friend Roger (Richard Haydn) helps her navigate her way in Ryan’s blue-collar world.

The pleasant but superficial film might have been good medicine for a war-weary country, but it has not aged well. Though Colbert’s dream sequence favorably caught my attention, that has her rescued by the boorish Superman, looking like MacMurray, showing she secretly has the hots for him while at the same time it cleverly pokes fun at Dali’s surrealism that was the rage of the art world in the 1940s. 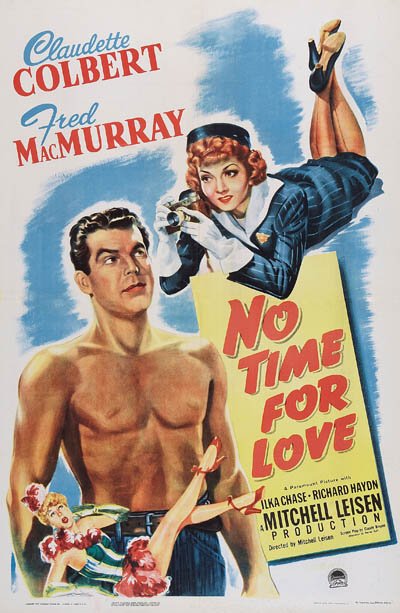