NORTH STAR, THE (aka: ARMORED ATTACK)

FDR suggested the studio make a film showing our WWII ally Russia in a good light to support their effort against the Nazis, and Samuel Goldwyn took his strong suggestion to heart making a pro-commie film (Roosevelt’s son James was then president of the Goldwyn studio). Goldwyn, according to playwright Lillian Hellman, turned her earnest script, based on her book, into junk, something she deeply resented. During the McCarthy witch-hunts of the 1950s, Goldwyn and almost everyone who worked on the commie homage film found themselves haunted by the demagogue for their participation and the studio caved in to pressure and in 1957 recut it to 82 minutes for American television (the filmmakers were called before the House Un-American Activities Committee to explain why they madethe film).

Lewis Milestone (“All Quiet on the Western Front”/”The Front Page”/”Rain”) directed this ill-fated project, and kept it hokey. The Soviet propaganda is false, the dialogue is stilted and the Russian steppes seems more like fairyland than Russia. Americans playing Russian peasants in costume, shouldn’t be able to convince even the most gullible viewer they are Russians. Can you imagine Walter Huston and Walter Brennan as Russkies?

Kolya (Dana Andrews), Dr. Kurin (Walter Huston), Damian (Farley Granger, film debut), and Marina (Anne Baxter) are cheerful members of a utopian farming collective in the Ukraine known as the North Star. When the Nazis invade by air and armor the peaceful village, we follow the heroic activities of the villagers to repel the Nazis as some take to the hills as guerrilla fighters.

The Hearst newspapers ran headlines saying ‘UNADULTERATED SOVIET PROPAGANDA.’ There were many positive reviews from papers like the NY Times, but the film had too many dull spots, preachy propaganda and unreal moments to be that entertaining. It should be noted that there were some good performances: such as by Erich von Stroheim’s colonel doctor role as the evil Nazi leader of the occupied North Star village, who by force takes blood from the children of the North Star for transfusions for wounded Soviet soldiers; Huston as the village leader and humanitarian doctor; and Walter Brennan as the pig farmer who turns freedom fighter. 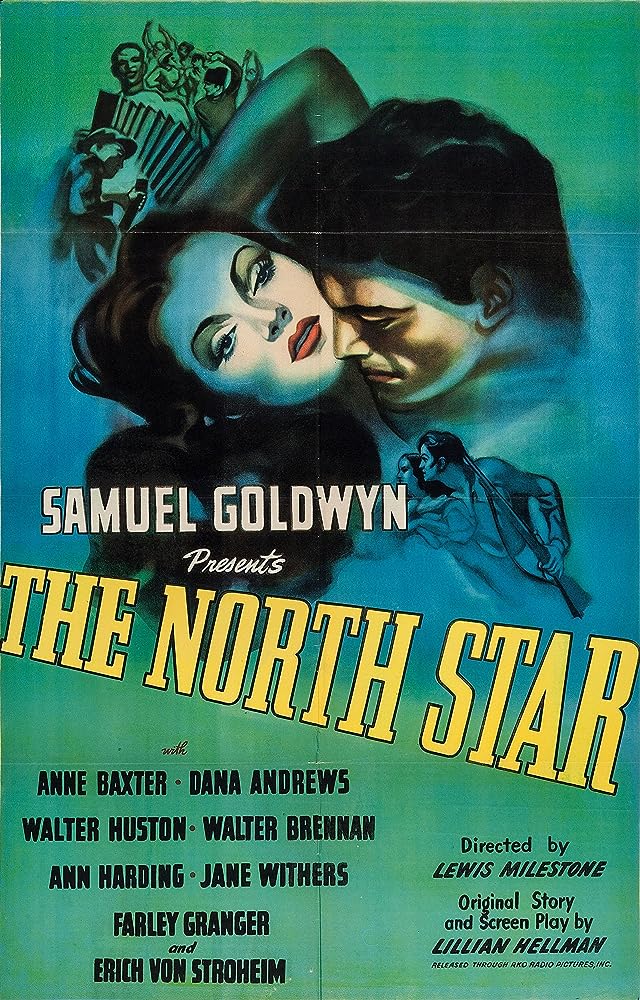