Writer-director Hirokazu Koreeda’s (“Maborosi”/”After Life”) austere heartbreaking film is a winsome documentary-like detailed study about four abandoned youngsters in Tokyo. It’s based on a true story but the characters were fictionalized. It was known in Japan as “the affair of the four abandoned children of Nishi-Sugamo.” The case achieved some tabloid notoriety in 1988 when it was discovered that the children, three of them without birth certificates and all fathered by different men, lived alone for six months without anyone intervening.

It took a year to shoot this near masterpiece (the overlong story-141 minutes-was meant to reflect the four seasons of their plight), that serves as a condemnation of a wayward selfish mother, who has stolen the joys of childhood from four of her innocent youngsters. Japanese society doesn’t get off with a free pass, as its indifference is seen as also being criminal. Yuya Yagira, a nonprofessional, won the best actor award at Cannes last year for his brilliant performance as the protective eldest child at 12.

Keiko (You, Japanese pop star) is a single mother who moves with her 12-year-old son, Akira (Yuya Yagira), into a tiny Tokyo flat with a balcony; unknown to the landlord is that Kieko also has three other children: ten-year-old Kyoko (Ayu Kitaura), seven-year-old Shigeru (Hiei Kimura), and five-year-old Yuki (Momoko Shimizu). The two younger ones are smuggled into the apartment hid in the trunks, while Kyoko was met later at the train station by Akira and was led undetected into the apartment. The mother sets the rules that only Akira is allowed outside and that the others must remain quiet so as not to draw attention to themselves so they won’t get evicted again; and, also, none of the children are allowed to attend school–but are motivated to follow a program of home study.

The filmmaker shows great care as he meticulously follows the children fending for themselves while mom at first comes home late at night and buys them off with toys, but soon takes off for longer periods and eventually abandons them for good without a word. The children’s appearances and living conditions worsen with time and deteriorate even further with the loss of the apartment utilities, and without stealing Akira tries his best to provide food and guidance but can never supply the emotional support needed. The bleak and gruesome story is not without moments of humor and brief glimpses of joy are captured when the children play in the park and when Akira plays baseball with a team. But such moments are short lived as the apartment turns into a pig sty, their fantasies are squashed and their adventure turns into a harrowing tale of criminal neglect, as this tragic story mirrors real life in its intensity taking the viewer along as a witness to this tragic journey. In the end, it’s the children’s ability to somehow manage to get by that is celebrated as a testament to their resilience and human spirit. Unfortunately, this humanistic film couldn’t strike out and get to broader territory and come up with something fresh to say about such a bizarre tabloid tale that is so sadly fitting for modern times and the ever changing human condition.

There’s a soundtrack of ukulele music meant to reflect the mood displayed on the screen, which did little for me. 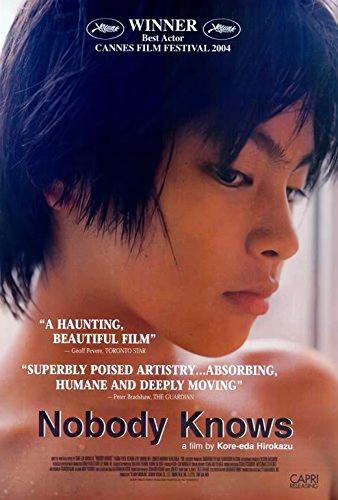