Volker Schlöndorff (“The Tin Drum,”) presents a different way of looking at the Holocaust experience. He uses the prison diaries from a priest, Father Jean Bernard, who survived a four-year internment in Dachau and fictionalizes a nine-day leave in Febuary of 1942 of the priest named in the film Reverend Henri Kremer (Ulrich Matthes) and his visit with a fictionalized particularly vile high ranking Gestapo official Gebhardt (August Diehl), a former Catholic seminarian, who wants the priest to betray his faith like Judas and get the passively protesting bishop of Luxembourg, Bishop Philippe (Hilmar Thate), to sign a ‘pastoral letter’ to give sanction to the Third Reich (showing Nazism is in accord with Roman Catholic teaching). If the priest flees, his family will be sent to the camp and all inmate priests from Luxembourg would die. In Dachau there were 3,000 Catholic priests imprisoned in the Priests’ Block, where the so-called dissident clergy were subject to abuse but still treated better than the Jewish inmates in an attempt to make them hated by their fellow prisoners. Half of them did not survive the camp, but Kremer did. The gripping film examines the conscience of the priest, arrested for his anti-Nazi activities on the French border, as it shows how the priest is tormented by this decision he has to make and is uncertain which is the wisest course to take as he’s being emotionally manipulated by the Nazis. The film, divided into nine chapters that correspond to the days of his leave, eventually turns into one of an ethical question, more than anything else, as the war of words between the sparring cold-blooded Gestapo agent and the taciturn, hollow-cheeked, physically drained and sallow looking priest show his doubts about making a secular decision that asks that so many others besides himself bear the cross as compared to the rigid certainty of his barbarian counterpart who has intellectually rationalized Judas to be a good guy and therefore the Nazi proudly has taken on the identity of Judas.

The somber script by writers Eberhard Görner and Andreas Pflüger can’t help but be heavy and filled with unpleasant situations. We see the grief through carefully worked in scenes of misery in the camp shown in flashback and the anxiety felt by Kremer’s concerned family (his sister Marie and her husband, and his wealthy industrialist brother Roger (Germain Wagner) who is prepared to help Henri escape after a failed attempt to bribe the Gestapo official). The Church’s collaboration with the Nazis, a hot-button issue, is glossed over with doublespeak, so by the end it’s not as important a presentation as is the personal moral conflict of the priest. The blank nine-days from the diary are given a good philosophical working over by the ambitious but careful writers, not willing to step on the toes of the powerful Roman Catholic Church to go any further than they have to. Nevertheless, even if not the most daring film, the serious and sincere portrayal by Matthes, who goes from playing Goebbels in “Downfall” to the saintly concentration camp priest here, gives the drama a fresh way to illuminate another worthy dark Holocaust story. 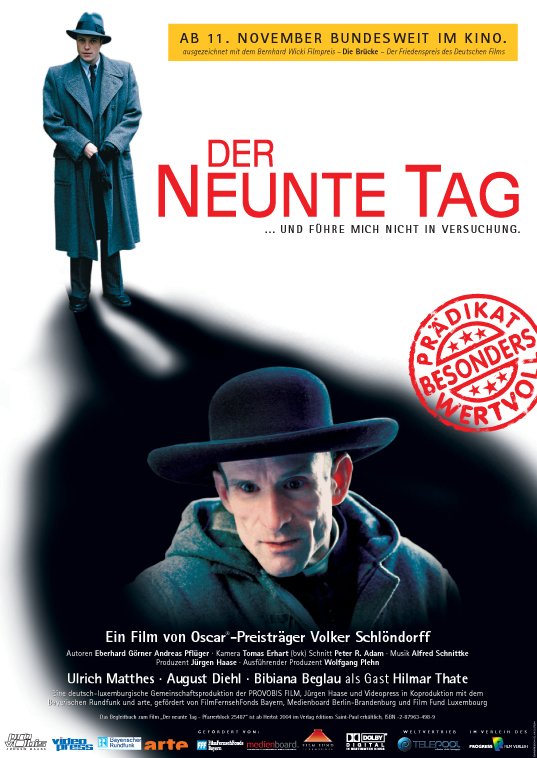