With the death of Stalin nine years earlier, Soviet films gained a new freedom as evidenced by writer-director Mikhail Romm’s (“Lenin in 1918″/”Attack from the Sea”/”Triumph Over Violence“) b&w shot realistic Cold War set film about idealistic nuclear scientists who care about humanity.

Though nuclear scientist Dmitri Gusev (Aleksey Batalov) receives too much radiation exposure during an accident at the Physics Research Institute, in which also lab leader Professor Sintsov (Nikolai Plotnikov) has been exposed, the brave physicist refuses to drop the humanitarian project, to make fusion work in a reactor, for a safer job. His neglected attractive scientist girlfriend Lyolya (Tatyana Lavrova) balks at marrying him and plans on eloping with Dmitri’s friend and colleague Ilya Kulikov (Innokentiy Smoktunovskiy), after neither can convince Dmitri to change positions. But the lady changes her mind again and marries Dmitri, joining him at the Siberian research center. The cynical Ilya also works there, and they all enjoy working to make the world better on the project. But Dmitri’s health deteriorates when exposed again to radiation, and the ill scientist takes a leave to visit his Moscow family. At a Moscow clinic doctors perform a risky experimental bone marrow transplant, as Ilya visits to tell Dmitri their experiments yielded a new type of radiation which was not thermonuclear, as projected, but still one that would contribute to more scientific knowledge. This cheers Dmitri, and he plans to celebrate with Ilya and his wife after the operation.

Though the film was too monotonous to enjoy, it is artistically directed. But more important, the fiction film allows the Soviets to show their human side and that it’s possible for nuclear accidents to happen at its facilities. 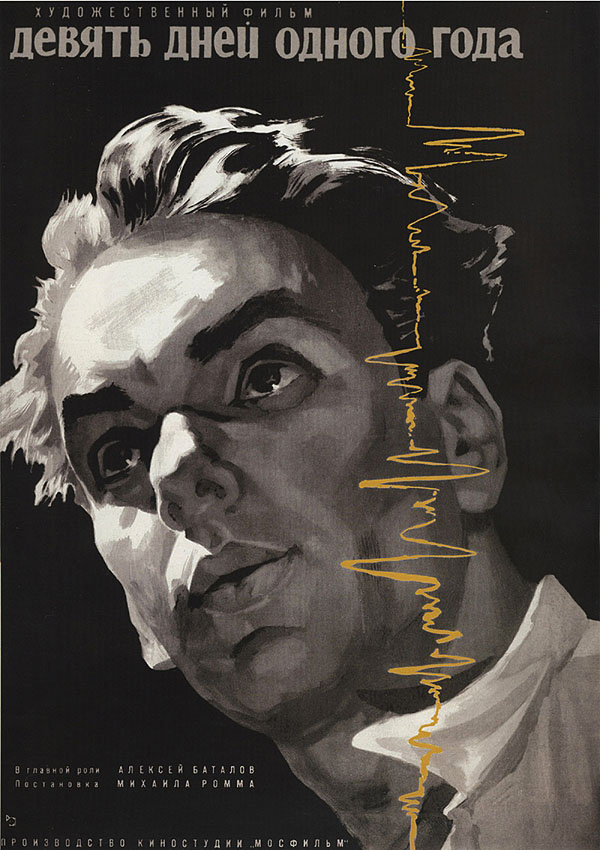