“Gavison’s whimsical and melancholy tragicomedy keeps the Israeli-Arab conflict in the background.”

Writer-director Savi Gavison’s whimsical and melancholy tragicomedy keeps the Israeli-Arab conflict in the background and keeps the political context absent as it takes a hard-bitten look at the war’s consequences on the domestic contemporary Tel Aviv scene in regards to matters of the heart, anguish and sexual obsessions. There were a few priceless scenes that went beyond just telling about the self-absorbed bourgeois characters featured by linking their neurotic personal lives with the tension in their everyday life. One such scene had a group of Hasidic men getting out of their van and offering a dance of joy to the more secular lapping up lattes at a streetside cafe and becoming so affected by this unexpected surprise that they join in clapping–indicating the communal unity that underlies Israeli life. The point being that when offered a false sense of feel-good hope in such a skittish and shaken country no matter how contrived and unreliable, seems better than no hope at all.

This darkly drawn look at adult relationships is seen through the eyes of a bright but never fully developed, Peeping Tom, nerdy, glum, anti-social 14-year-old, Nadav (Aviv Elkabets). He’s the child of separated parents, living with his promiscuous fashion-designer mother Alona rather than with his Air Force pilot turned religiously-obsessed yeshiva living father Amnon. His shadowy reflections never threw much of a light on the subjects even while it richly conveyed the everyday absurdity and darkness of living in such a threatened environment. There were too many awkward scenes and a forced sense of quirky comedy that kept me removed from the characters. The scene of a Russian émigré named Alex, a researcher of sleeping disorders, conveniently cast as the lookalike for the heroine’s dead husband, walking around in the streets nude because it made him feel clean, seemed to be used more for making a symbolic point than conveying the actions of a real person trying to work out his problems. Gavison keeps the plot way too busy with sidetrack issues to keep his eye on the ball of what he’s trying to get at about the human condition.

The heart of this coming-of-age drama involves Nadav’s unhealthy obsessive crush on his emotionally strung-out beautiful Aunt Nina (Ayelet July Zurer), his mother’s sister, whom he loves with a passion and resents any relation she has with a man. After her reservist army officer husband Haiman (Yoram Hatav) is killed in a terrorist attack, Nadav moves into his aunt’s apartment on his mother’s urgings to keep her company. Nadav’s story is told in flashback, as his embarrassing diary (used here as the film’s framing device) about his Peeping Tom activities is found in school and the counselor calls in his father to read it. From the diary flashback we learn how Nina after her mourning period gets involved with a filmmaker (Alon Aboutboul), whose girlfriend is a successful artist. Their relationship shoots for sensitivity but reaches only superficial conclusions, and it ends as uninterestedly as it began. The film’s trouble seems centered mainly around the problem of having such a misfit and inconsequential adolescent character as Nadav relating such a complexly drawn adult story. It’s hard to come to terms with him, as he pops in an out of the narrative offering mostly immature comments in his futile attempts to understand the adult world, even teaming up with another Peeping Tom—his twentysomething friend Menahem (Dov Navon). 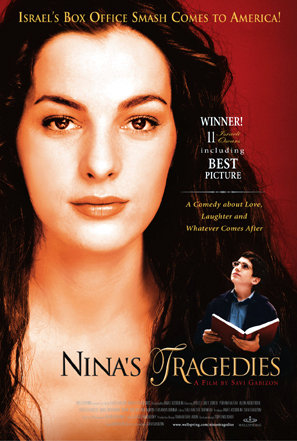 WICKED AS THEY COME

NINE DAYS OF ONE YEAR