NIGHT OF THE GENERALS, THE

Anatole Litvak (“Mayerling”/”Sorry, Wrong Number”/”The Snake Pit”) directs this quirky character study in Nazi evil that takes itself so seriously but is unintentionally a hoot. It’s based on a best-selling novel by Hans Hellmut Kirst along with some plot lines taken from James Hadley Chase’s book The Wary Transgressor. Paul Dehn and John Kessel are the writers of the murky screenplay. Though it has a major international cast, the acting is standard issue blockbuster acting except for Peter O’Toole’s flamboyant over-the-top psychopathic one that is so zany it moves the pic into camp territory and takes away any attempt to get at anything worthwhile in the study of Nazi depravity (if that indeed was the pic’s intention).

In Warsaw, in 1942, in occupied Poland, a Polish prostitute who is also a German spy, is brutally stabbed to death over a hundred times and a witness only sees the uniform of a Nazi general leaving the vic’s apartment and not the face of the killer. Investigating the murder is Major Grau (Omar Sharif) of German Intelligence, who narrows down his search to three generals: the calculating General Kahlenberg (Donald Pleasence), the old guard General von Seidlitz-Gabler (Charles Gray) and their rigid ruthless young battlefield hero commander General Tanz (Peter O’Toole).

The persistent Grau is transferred by the brass. But two years later in occupied Paris there’s another similarly brutal murder of a Parisian prostitute (Veronique Vendell ), and the evidence points to the driver of General Tanz, Lance Cpl. Kurt Hartmann (Tom Courtenay). Grau is also there to investigate, but the investigation coincides with the day there was a botched plot in 1944 by the generals to assassinate Hitler (which included Kahlenberg & Gabler in the plot). When Grau goes to arrest the madman Tanz for the murder, Tanz kills him and charges him with treason as being a traitor who was part of the assassination plot. Hartmann was forced to go on the run by Tanz and vanished into thin air, never heard from again.

The story picks up again in 1965, in Hamburg, where a prostitute is brutally murdered like the ones in Warsaw and Paris on the day that Tanz turns up in Hamburg to be honored by a neo-Nazi group after serving a twenty year sentence as a war criminal. Insp. Morand (Philippe Noiret) of Interpol, a friend of Grau’s from their days in occupied Paris when Morand was aresistance sympathizer who formed a warm alliance with Grauand knew about his investigation of the generals, gets the proof needed that Tanz is the fruitcake killer of the prostitutes by locating the key witness Hartmann–now under a new name and a farmer in Munich married to the estranged daughter (Joanna Pettet) of the wormy survivor, General Gabler.

The big budget pedestrian film with the uneven narrative was a box office flop, nevertheless it had a few startling sequences that were effective in depicting Nazi depravity. But as a whodunit, it suspends all suspense from the get-go, as the O’Toole character is insane from beginning to end and leaves no doubt he’s a nutty serial killer (but linking this degenerate to Hitler and those evil fascist loonies never came across as anything but cartoonish). There were those who believed O’Toole sabotaged the pic giving his part no development or chance to be looked at seriously because of his disdain for the way the vulgarian producer Sam Spiegel humiliated director Litvak on the set, in front of the actors, throughout filming. Nevertheless it’s worth seeing, even if for all the wrong reasons. 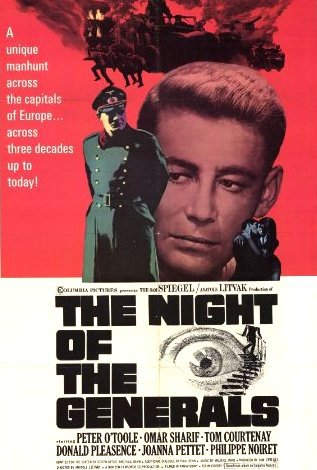