Night of the Demon is set in London. It is a very scary psychological horror story that is noted for its good use of atmosphere and its fast-pace. This is one of director Jacques Tourneur’s (Cat People/I Walked With A Zombie/The Leopard Man) better films. It is based on a short story “Casting the Runes” by Montague R. James and is written for the screen by Charles Bennett. The only thing that upset Tourneur is that he didn’t want the demon revealed so early in the film, but the studio heads insisted.

The film begins with a picture of Stonehenge and a voiceover declaring that evil supernatural creatures exists, and by knowing the keys to the runic symbols man can conjure up the demons of hell.

In the next scene an anguished Professor Harrington (Maurice Denham) is rushing past the butler to enter Dr. Julian Karswell’s (Niall MacGinnis) estate, where he resides with his dotty mother (Athene Seyler). Harrington says it is urgent to talk to him about a grave matter, as he begs him not to go through with his evil plan and that in return he will discontinue his investigation that his devil-worshiping cult group is a fraud. Karswell tells him it is too late.

In the morning, the professor’s body is found electrocuted and mutilated. The night before the viewer saw a glowing cloud of smoke following the professor home and then a Godzilla-like demon emerge to attack the defenseless man.

A friend of Professor Harrington, the American psychologist Dr. John Holden (Dana Andrews), flies to London to attend a paranormal psychology conference that Harrington, his assistant, Professor O’Brien (Liam Redmond), the scientist Kumar (Elliott), and others will be attending. The main topic is the witchcraft of Karswell and his demonology practice.

Holden is an intelligent, rational, and skeptical man. He went into this paranormal field of study to debunk all the superstitions people have that make them so afraid, as he doesn’t believe that his friend Harrington was killed by a demon. But Harrington’s attractive niece Joanna (Peggy Cummins) does. The kindergarten teacher visits Holden’s hotel room and urges him to give up his investigation of Karswell because she believes it’s dangerous. She says this after she reads him a page from her uncle’s diary saying that Karswell can use the rune symbols to evoke the demons.

In the London library, Karswell confronts Holden and offers to lend him the rare book on witchcraft that Holden is unsuccessfully searching for. He also secretly slips a special ancient parchment into Holden’s briefcase. This parchment carries a curse that will mean death for whoever possesses it, unless that person can pass it onto someone else.

Taking up Karswell’s invitation for a home visit, Holden and Joanna visit his immense estate outside of London. On his lawn Karswell is playing the part of a good magician on Halloween to neighborhood kids, as he does white magic tricks and plies them with candy. To the doubting Holden he asks, “Where does the imagination end and reality begin?” When Holden is adamant about not ending his fraud investigation, Karswell performs a magical act from medieval times as he conjures up a cyclone. He also tells Holden he will die in three days at 10 p.m..

Karswell’s mother is upset with her son and asks him to end his evil plans. But in a very human way he responds why he can’t: “He does what he has to out of fear, as the demon won’t let him stop and remain alive.”

The brave scientist gradually becomes convinced that his life is in serious danger, as the director did a great job of showing Holden’s confidence beginning to wane and fear taking hold. One of the most gripping scenes is when Holden broke into Karswell’s house library to read his witchcraft notes and a harmless black cat suddenly becomes possessed and changes forms to attack him as a panther. When Holden leaves Karswell’s by way of the woods, a cloud of black smoke appears to be changing into a beast following him as he runs through the woods for dear life.

At the film’s conclusion the director playfully has the surviving characters say as they witness another mysterious death on the train tracks, “Maybe it’s better not to know!”

This was a first-rate classic horror story, whose richness is enhanced because the shock scenes are understated and left mostly to one’s imagination. They don’t make horror films much better than this one. The Niall MacGinnis character of the black witch was loosely based on the occultist, Aleister Crowley. 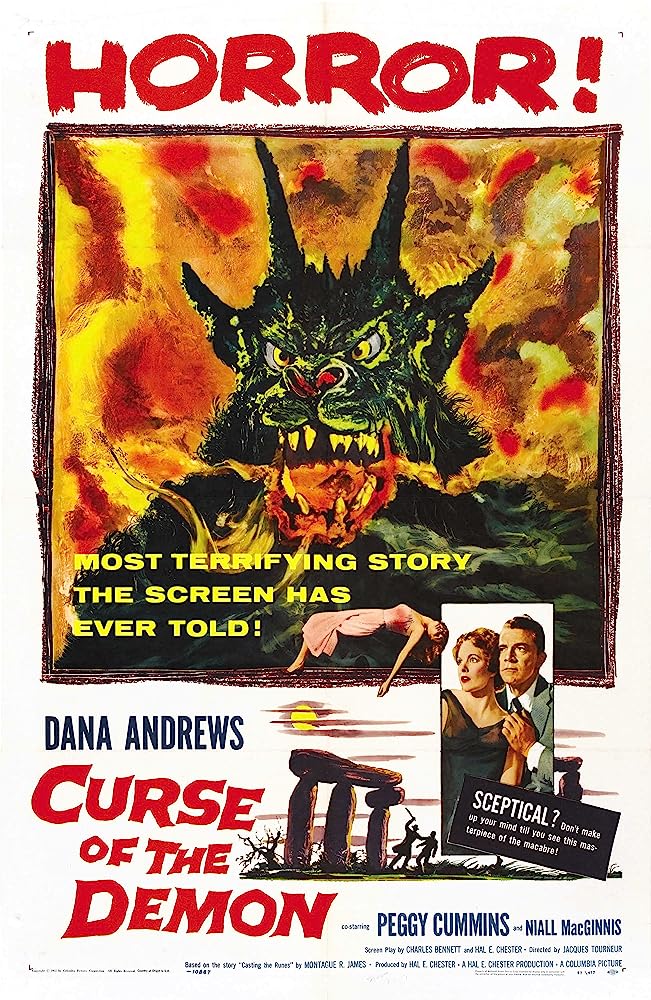