“I loved the film’s dopiness without having any reservations.”

Snappy pre-Production Code thriller directed by William A. Wellman (“So Big”/”The Public Enemy”/”Lady of Burlesque”), with racy scenes of nurses in panties and bras as they keep dressing and getting undressed. The coarse performers, playing 1930’s baddies, gleefully overwhelm with tough love the loose amoral script handed in by Oliver H.P. Garrett and Charles Kenyon; it’s based on the novel by Dora Macy.

There’s a silly plot, that’s hard to fathom, of unethical and incompetent Dr. Ranger (Ralf Harolde), in league with vicious family chauffeur Nick (Clark Gable) to starve two little girls, Desney and Nanny (Betty Jane Graham & Marcia Mae Jones), of an unfit wealthy widowed mother, Mrs. Ritchie (Charlotte Merriam). Mom’s plied with booze by the unscrupulous Nick, her gangster boyfriend, so that the opportunistic chauffeur can keep her from thinking straight so he can wed the evil mother and get his grubby hands on the little girls’ trust fund. Hard-boiled nurses Maloney (Joan Blondell) and Lora Hart (Barbara Stanwyck) get work as private nurses just after completing nursing school and take care of Desney and Nanny around the clock–Maloney takes the day shift and Lora becomes the night nurse. Lora’s heart goes out to the kids when she sees they’re not well because of malnutrition and when telling this to Dr. Ranger she’s ridiculed, while Nick socks her in the jaw threatening to kill her if she goes to the cops. Lora then confers with hospital head Dr. Bell (Charles Winninger). He tells her to stay on the job and get proof of malpractice so the police can act. In the end, Lora gets her amiable romantic interest bootlegger friend Mortie (Ben Lyon) to run interference for her with Nick. Then she gets Dr. Bell to save the weaker Nanny with a blood transfusion in the nick of time, and is told by Mortie she doesn’t have to worry about Nick any more because his friends gave him a one-way ride.

The fast-moving story is on life-support, but the ripping performances of Stanwyck, Blondell and Gable, as a goon without his trademark mustache before he hit the big time, are fun to watch as they chew the scenery and punch each other around both physically and with verbal digs. It’s the kind of hospital film where you can more easily believe the nurses are dance-hall girls and the doctors have a better chance for being taken for bootleggers. Despite (or maybe because) of such dramatic gaffes, I loved the film’s dopiness without having any reservations. 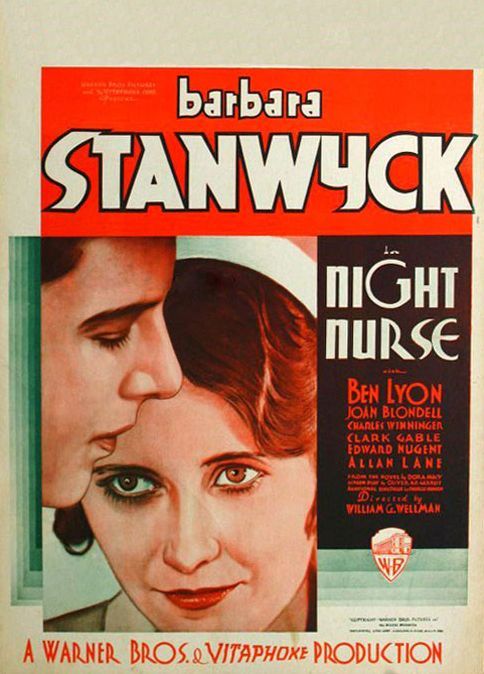 MARK OF ZORRO, THE