“A fascinating character study of someone in a panic.”

Nightmare is a larger budget remake of the 1947 Fear in the Night, also written and directed by Maxwell Shane from a Cornell Woolrich story. The remake has a far better cast, a more jazzy musical score, and makes greater use of its location shots around New Orleans. What it lacks is the same B-film charm that graced the original.

New Orleans jazz clarinetist Stan Grayson (Kevin McCarthy) awakens alone from a bad dream in his hotel apartment. He dreamed that he stabbed a man to death in a mirrored room. When he looks in the bathroom mirror, he finds things on him that happened during the dream: fingerprint marks on his throat, blood on his arm, scratches, a button pulled off another man’s suit and an odd-shaped key. Believing he might have killed a man, he takes off from a recording session and visits his detective brother-in-law Rene Bressard (Edward G. Robinson) for help. Rene tells him to chill out it was only a dream, that he’s been drinking too much and working too hard. But the vivid memory of him murdering a man still haunts him, as does a strange tune that he remembers from the dream. Hoping to find out more about that tune, he unsuccessfully prowls the jazz spots in the French Quarters. Wishing to cheer Stan up, Rene arranges for a picnic with his sister Sue and singer girlfriend Gina. A sudden downpour breaks up their picnic, and while seeking shelter Stan is drawn to driving up to an empty mansion. This turns out to be the same house in his dream.

Rene becomes upset that Stan was holding out on him when informed that a murder recently took place in that house. He takes the distraught Stan back to his hotel room, and tells him tomorrow he will arrest him unless he leaves town. Stan then attempts to jump from the ledge of his upper-floor hotel room, but is rescued by Rene. The hard-boiled cop begins to soften, and decides to help Stan by piecing his story together to see where it makes sense. Eventually they find evidence that the nightmare was based on reality.

Shane creates a dreamy world of shadowy existence, seedy urban nightlife, exotic bayous, tingling jazz scores, and a tense film noir atmosphere. It’s a fascinating character study of someone in a panic who thinks he’s losing all his marbles, but is trying desperately to hold onto what he believes is real. Kevin McCarthy’s performance is superior to the original’s DeForest Kelley, but I wouldn’t discount the cheapie film entirely–it did everything this version did and cost less to make. 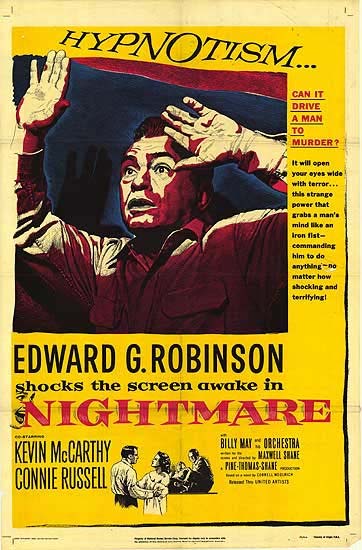