“Humanizes the great poet who appealed to intellectuals, peasants, workers and prostitutes.”

An unconventional and intriguing telling of a chapter in the life of the exiled Chilean poet and Communist senator Pablo Neruda (Luis Gnecco). It mixes fact with fiction to tell of Neruda’s escape from arrest in corrupt Chile in 1948.

The innovative and lucid direction by Chilean director Pablo Larrain(“The Club”/”Jackie”) humanizes the great poet who appealed to intellectuals, peasants, workers and prostitutes. Writer Guillermo Calderon provides an engrossing screenplay, laying out how the imagination is favored by the poet on-the-run. Gael Garcia Bernal plays the obsessed, fame seeking invented police inspector, Oscar Peluchonneau, who on orders of President Videla (Alfredo Castro), the former leftist, relentlessly tracks after Neruda with his 300 policemen task force, after Neruda faces impeachment for accusing the government of abandoning communist ideals to appease the U.S. and goes underground rather than faces the charges.

By smuggling out letters and writings to sympathizers in Europe such as Pablo Picasso (Emilio Gutierrz Caba), Neruda’s legend as a freedom fighter and poet grows even as he’s shown to be a vain man consumed with fame and a libertine who abandoned his first wife and daughter to marry an Argentine socialite (Mercedes Moran). The poet is questioned by some for seeking safety in a foreign land while his comrades are persecuted at home. Neruda uses the fascist-[ike police chase to reinvent himself and show the world that he’s the persecuted poet and the cop is a threat to liberty. After crossing the snow-covered Andes to freedom, Neruda morphs into a symbol for liberty.

It’s a refreshing way to film this historical noir story that brings into focus the blend of arts and politics, but doesn’t have the poet’s sense of anger to make its story deeper felt. 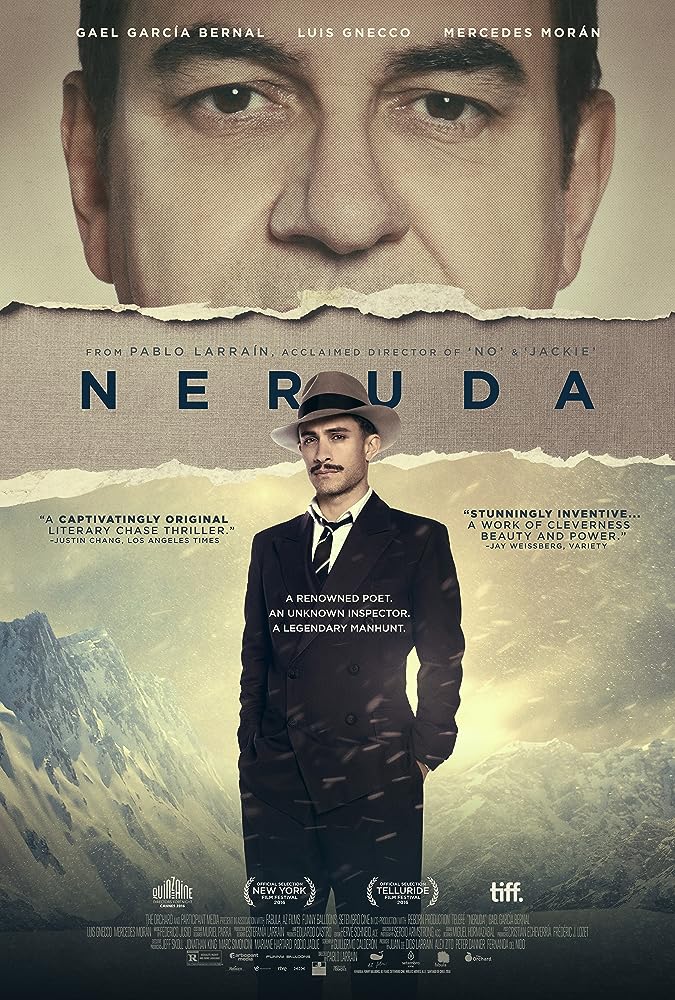