The last part of writer-director Jarmusch’s trilogy of “Stranger Than Paradise” and “Down by Law” is another of the indie filmmaker’s off-beat playfully droll comedies shot in the minimalist style. It’s the first film he shot in Technicolor; Robby Muller is the capable cinematographer. It’s built around three episodes taking place the same night in a seedy black-run hotel in Memphis, Tennessee. It can be viewed as an homage to Elvis and other notable rockers and as zany entertainment, but also on a deeper level it’s about the ability to tell a good story, how America looks to outsiders, and how people make connections among themselves and with their place. It’s brilliantly witty and keenly observant of the social scene.

In the first episode entitled “Far From Yokohama” a teenage Japanese couple, Mitzuko (Youki Kudoh) and Jun (Masatoshi Nagase), come to Memphis on an Elvis pilgrimage to visit Sun Studio (the birthplace of rock ‘n’ roll and where the King recorded) and Graceland (the King’s home and burial place). The couple gets off the train (in the background we hear Elvis singing “Mystery Train”) and wander around the crumbling decayed city carrying their one trunk, taking a quick tour of Sun Studio and staying overnight at the dumpy Arcade Hotel in a run-down black neighborhood. The bellboy (Cinque Lee, Spike’s younger brother) and night clerk (Screamin’ Jay Hawkins) kill time amusing themselves with light banter and listening to an all-night radio show hosted by Tom Waits. The Japanese couple retreat to their room, where every room has a garish picture of Elvis on the wall (the reason a black hotel would have such a picture is explained because it’s white owned). Jun takes photos of the room and in their conversation it’s discovered they have a slightly different take on who they prefer: Mitzuko is an Elvis fan, while Jun favors Carl Perkins. They make love under the picture of their idol, listen on the radio to Elvis sing “Blue Moon,” and look out the window at a passing train in the distance and imagine their trip is hip by blocking out what others can only see as a crime-ridden and depressed town. A gunshot heard later at night returns them to reality. The second episode is entitled “A Ghost.” Luisa (Nicoletta Braschi) is a wealthy Italian woman taking her husband’s coffin back to Rome, after their honeymoon suddenly ends, when the plane makes an unexpected stopover in Memphis. At a diner a scary man (Tom Noonan) hustles Luisa by telling an Elvis ghost story, after giving him some money for the bogus ‘Elvis as a hitchhiker’ story she wanders around the neighborhood and tries to avoid the wacko by dropping into the first hotel she sees which happens to be the Arcade Hotel. Rather than be alone, she shares a room with the penniless talkative Memphis girl Dee Dee (Elizabeth Bracco). Dee Dee is running away from her English husband Johnny (Joe Strummer, formerly of the Clash), who is really only a boyfriend. He’s called Elvis by his black friends because his rockabilly hairstyle is like the King’s. Deedee plans to see a girlfriend in Natchez and get a job there in a beauty salon. Luisa is startled in the night from a ghostly visit from the King. It was so odd, she doesn’t even tell it to Dee Dee after waking her. The final episode is entitled “Lost in Space.” It has a drunk Johnny upset that he lost his job and Dee Dee walked out on him, all in the same day. When he waves a loaded gun around at a black nightspot, the bartender calls his black friend Will Robinson (Rick Aviles) and his well-mannered white barber brother-in-law Charlie (Steve Buscemi) to pick him up. They ride around in Will’s battered pickup truck and on a whim Johnny holds up a liquor store and shoots the clerk. The three drunks hideout in the Arcade Hotel, where Will’s brother-in-law is the night clerk. The shot fired comes from their room, as Charlie stops Johnny’s suicide attempt and takes a slug in the leg.

Jarmusch finds both humor and pathos in his outsider characters and hones in on a slice of American pop culture that foreigners might see differently from Americans. Through these interconnecting episodes it shows (at least to the viewer) that the Japanese tourists, Italian traveler and British punk, all different types, have a way of seeing things Americans cannot because their senses are not dulled by the familiar. 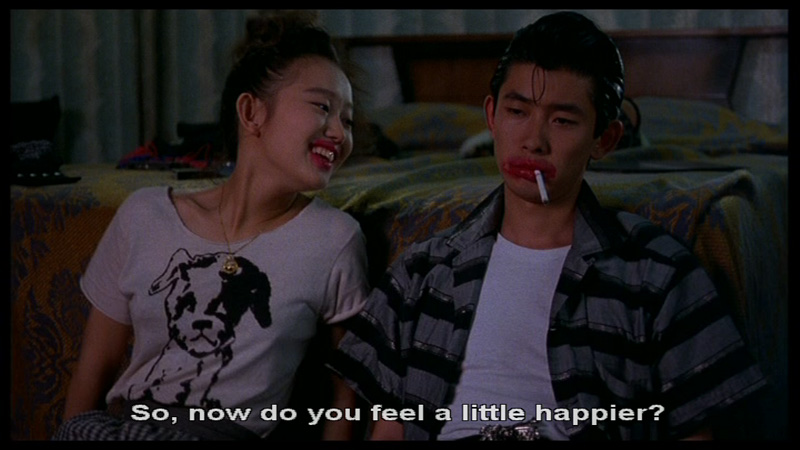