MYSTERY OF MR. X, THE

A maniac escapes after serving a 15-year prison sentence. He aims to kill one cop for each year he spent in prison. He ends up killing 8, as he is tracked down by a lovable jewel thief who is romancing the police commissioner’s daughter and is concerned with protecting his name from a murder charge.

The film is set in foggy London and takes full advantage of the dark atmosphere. It is directed by Edgar Selwyn, and Philip MacDonald adapted his own novel to the screen. It is a witty, well crafted thriller, that has a charm that sparkles like a diamond. The Mystery of Mr. X was remade in 1952 as The Hour of Thirteen.

The film opens to newspaper headlines stating that in the last 5-days there have been 5 policemen killed in the same way: stabbed through the heart by the killer’s sword cane. In each incident, the killer sent a postcard to the newspapers saying: Tonight — signed Mr. X.

Nick Revel (Robert Montgomery) robs the Drayton diamond and when the cat burglar climbs out the side of the building he finds cop number 6 stabbed to death on the ground below. The newspapers associate the diamond thief with the cop killer, making the diamond too hot to handle. Meeting with his two crime partners, – Palmer (Forrester), a cockney taxi driver, and the nervous Willis (Irwin) – he is told to throw the diamond in the Thames and to even ignore the insurance reward of £10,000 pounds.

Meanwhile, sportsman and party reveler, Sir Christopher Marche (Forbes), returns from some car racing events abroad and greets his fiancée Jane Frensham (Elizabeth Allan) by telling her he can’t see her tonight because he must attend the Regimental party. She is the daughter of the police commissioner of Scotland Yard, Sir Herbert Frensham (Henry Stephenson), who is investigating the cop killings. That night, playfully drunk, Sir Christopher snatches the helmet of a policeman after knocking him out, wanting to use his helmet to drink out of at the party. The policeman soon becomes the 7th victim and has Sir Christopher’s scarf clutched in his grasp which Jane recognizes as his. He is arrested and charged with murder.

Nick concocts an alibi for Sir Christopher with the help of Palmer, and acts as a witness for Sir Christopher at his court hearing. He does this expecting the police commissioner will be grateful that he saved his family from an embarrassing incident and will thereby meet with him so that he can give him his plan on how to catch Mr. X. He wishes to solve the killings so he can sell the hot diamond and clear himself from being thought of as the cop killer. Nick succeeds in clearing Sir Christopher of the murder charge, nevertheless Sir Christopher is sentenced to 10 days in jail for the assault on the policeman.

Nick thereby has time to make Jane’s acquaintance and the two fall for each other over lunch. He also gets his plan of capturing the serial killer into her father’s hands, who passes it on to Superintendent Connor (Lewis Stone) of Scotland Yard. Connor immediately suspects Nick of being both the diamond thief and Mr. X, and has him tailed and his apartment searched. But he apparently didn’t do too good a job of searching, because the diamond hidden in a lamp socket was undetected.

Connor brings in for questioning a diamond appraiser named Hutchinson (Simpson), who is about to crack and name Nick as the thief in exchange for a suspended sentence. Not waiting for that break, Connor goes to arrest Nick in his flat; but, he finds that he’s escaped disguised as a constable. Cleverly Nick left a map where Mr. X will strike next in his coat pocket, which he placed in the superintendent’s car.

In this sophisticated comedy/thriller, Nick gets Sir Christopher so jealous that he breaks his engagement. Nick also figures out by locating where the other 8 murders took place, where the next one will be attempted. He sees the pattern on the map of the letter X being formed. So he then sets himself up as bait for Mr. X to attack. When the killer falls into his trap Nick, who already sent the diamond back to Scotland Yard, goes from being a suspect to a hero. He has been reformed through love. 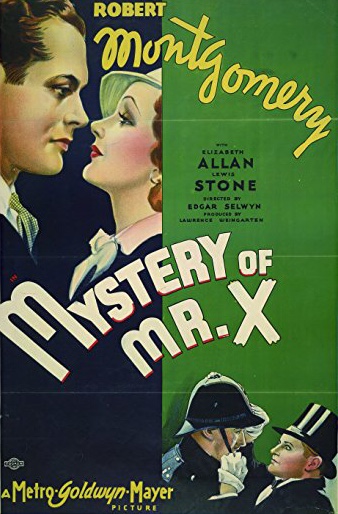