“A stimulating grainy black-and-white shot fictionalized biopic on the last two years of one of the great 20th century literary figures, Antonin Artaud.”

Gerard Mordillat presents a stimulating grainy black-and-white shot fictionalized biopic on the last two years of one of the great 20th-century literary figures, Antonin Artaud. Jerome Prieur is the director’s co-writer. The film does a marvelous job in re-creating the atmosphere of post-war bohemian Paris and the nutty relationship between the near death from cancer and paranoid Artaud (Sami Frey) and the struggling young up-and-coming poet Jacques Prevel (Marc Barbe). Prevel’s purpose at the time was to keep the older poet supplied with drugs, mainly opium, as he hoped that by currying favor the noted poet would help launch his career. Artaud needed the drugs to kill the pain in order to complete his final tome.

The film is set in the Paris of May 1946, when Prevel through a letter of introduction by friend Marthe meets the intellectual, surrealist poet and gifted actor Artaud, who has just been released from a mental asylum after serving nine years as an inmate. Artaud is the founder of the “Theater of Cruelty” — an experimental school of theater for actors who are encouraged to let go of their middle-class inhibitions. It influenced the likes of Genet, Grotowski, and Berkoff.

Artaud makes for a haunting figure going in and out of rants, while dispensing both wisdom and nonsense in his pronouncements on art. Thinking of himself at times to be Jesus, he tells Prevel’s blonde young junkie companion Jany (Julie Jezequel) “That every time a child is born it drains blood from my heart.” Prevel’s pregnant and neglected straight wife Rolande works hard to keep the family eating by holding down a regular job, while hubby hangs around in his bare garret hoping for inspiration or with the wacky genius poet hoping to pick his brain and accomplish his ambitions.

Each artist in a perverse way feeds off of the other. Artaud uses the pain-killers to free his artistic talents and thereby publish before he dies. Prevel does not get the mentoring, guidance and friendship he desired, but manages to creep his way into the poet’s circles and live the poet trip. The film is told from the point of view of the thirtyish Prevel.

Though the relationship between the artists remains static throughout, with Artaud always holding the upper hand, the acting is first-class. Sami Frey was born to play Artaud and gives a brilliant, unforgettable, and intense performance. The secondary characters fade into the background, but that background is spiced with a vintage jazz-like flavor of that era’s Left Bank. Incidentally, the look of that time is chaotically affected with the actors modernly dressed and contemporary cars zipping by on the streets. While there was obviously no effort to keep the set authentic, nevertheless the overall look was compelling. It’s a compulsive, brainy and eye-catching film, especially as an intro to one of the more bizarre artists of the last century. 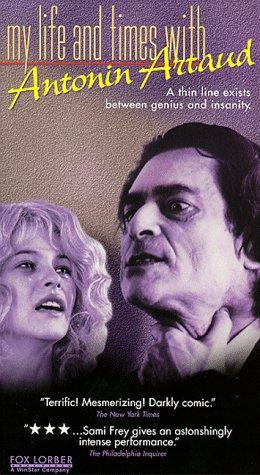