“Would get no love were it not for Harris’ powerful performance.”

A loose interpretation of Shakespeare’s King Lear that’s set in the underworld of contemporary Liverpool. It unsuccessfully tries to capture the elegance of the Bard’s play and at the same time be a gangster story. The depths of the play’s tragedy eludes the cinema version and it ends up being neither a worthy gangster thriller nor a work worthy of the Bard. Director-writer Don Boyd co-wrote the script with journalist Nick Davies. Dewald Aukema’s cinematography does a fine job covering in a realistic manner the dark urban terrain.

The elderly Sandeman (Richard Harris, his final film), an Irish immigrant, is the notorious boss of a Liverpool crime syndicate who clawed his way to the top. He’s much in love with his loyal wife Mandy (Lynn Redgrave), but the workaholic crime boss has spoiled his troubled daughters Tracy (Lorraine Pilkington), Kath (Louise Lombard), and Jo (Emma Catherwood) with material things and not enough love. When Mandy is shot dead during a street mugging by a junkie black lad, Sandeman believes contrary to evidence it was a mob hit and becomes unraveled and begins to make poor decisions as he sends his henchmen looking for who ordered the hit. In retirement, he turns over his empire to his favorite, youngest daughter Jo, the rehabilitated crack addict now a sane university student and the only straightshooter of the bunch, but she refuses and Sandeman totally rejects her. She plays the Cordelia part, while the other two are the scheming bad daughters. The two baddies take control of the empire. Kath is a madam at a brothel and married to Dean (Paul McGann), strong-arm man for Sandeman, and Tracy, the owner of a Liverpool soccer team (given to her as part of a money-laundering scheme), who is married to Jug (Jimi Mistry) a vicious drug dealer, conspire to take over the crime empire as they lust over a profitable Amsterdam drug deal. Their greedy efforts leave their old man in a weakened position abandoned by all except for his grandson (Reece Noi ), Kath’s slighted, mixed-race son. It was hard to believe that such a crafty and ruthless figure would fall so rapidly into a nothing, and the filmmaker never convinces us that this was possible. Soon a civil war takes place among Sandeman’s kin and associates over control of his syndicate, while the old man plots his revenge. Meanwhile police officer Puttnam (Aidan Gillen) and customs agent Quick (Tom Bell) try to put Sandeman behind bars before he dies.

Things get far too confusing in its events and too many sketchy characters are introduced to follow. The uneven crime drama (it never even bothers to make a point one way or the other about drug trafficking) would get no love were it not for Harris’ powerful performance. He’s a man who was blinded by ambition his entire life and when he woke up it was too late to do anything to soften how much his children hated him. Despite its attempt to be grandiose and modern, the crime drama is too trivial to measure up to the Bard’s play. Catherwood’s shrill performance also contributes to the film’s failure. 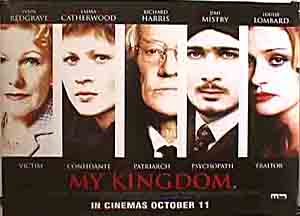